We ate one of our last home-grown onions of the season last night. It was a Candy onion — a softball-sized, sweet mild white onion known for its good storage quality. After curing our harvested onions in our garage for a few weeks, we stored them in our cool basement. The handful of remaining bulbs down there have mostly now gone soft and will be composted. But all in all, it was without a doubt our best onion season ever. How did we do it? I think it was a combination of nearly perfect onion-growing weather and the application of a new strategy to combat a lesson learned the hard way. 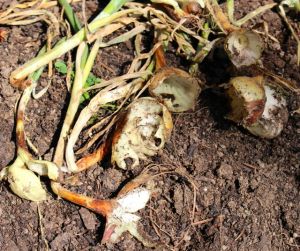 In the 2015 growing season, voles ate about two-thirds of our Yellow Granex onion crop.

Voles are everywhere in my vegetable garden. The sturdy deer fence that repels those hoofed beasts along with raccoons and even all but the most persistent squirrels merely protects the voles. Dense plantings of vegetables provide ample cover for these voracious rodents when they venture above ground, so hawks and owls aren’t’ any better able to catch them than the wandering cats or coyotes thwarted by the fence. We’ve tried vole traps. I’ve reached the conclusion that the voles are amused by the contraptions. They build tunnels around them, and yes sometimes I’m certain I hear snickering down the ubiquitous holes I find in every vegetable bed. But this past spring, I tried a new strategy that I think is likely responsible for the abundance of beautiful bulbs we harvested, all with no evidence of rodent nibbling.

The latest weapon in my vole-fighting arsenal.

Swedish growers developed the above product; the name translates as “plant-protection.” It is essentially super-concentrated blood meal combined with a vegetable oil that ensures the product sticks to the plants upon which it is applied. The Swedes developed it to protect tender trees from gnawing critters during their long, snowy winters. It is USDA approved for organic gardening operations. But I suspected that if I merely sprinkled the product above ground around the onions, the voles would tunnel in and devour the bulbs again. So I went underground, where they operate.

I took the above photo just after I finished planting the onion starts in their bed full of compost and supplemented with an organic root crop fertilizer. Onions like two things: plenty of nutrients, and a steady supply of water. Mine got both this year.

I always order onion plants, because in my part of North Carolina, the plants need to be in the ground as early in the spring growing season as you can manage. Companies that sell onion starts, as these skinny baby plants are called, contract with growers in the deep south, where their climate allows them to get seedlings going in late winter. The starts are shipped to customers when the growing season for onions is about to begin for a given area. My starts showed up on Feb. 20, and I was able to plant them on Feb. 22.

They don’t look like much when you first plant them.

February in my area was mild and relatively dry this year. I was thus able to clear and prepare my spring vegetable beds much earlier than usual. I cleared the onion bed first, because I knew I would need it first, so it was ready to go when my starts arrived, except for the implementation of my new anti-vole strategy. I decided to dig a trench outside the entire perimeter of the bed — about 6-8 inches deep — the level where I usually encounter the vole subway system. Inside the trench, I liberally sprinkled Plantskydd. The strong odor of dried (bovine) blood is supposed to repel rodents — and even deer. My results indicate that this is true.

It would be interesting to conduct an experiment that compared this product to the less expensive blood meal product you can buy from organic suppliers. I didn’t, because I didn’t want to take a chance on losing some of my crop. My suspicion is that Plantskydd is superior because it is super-concentrated, and because the vegetable oil mixed with it allows the dried blood to persist longer in the soil than regular blood meal. All I know for certain is that when we harvested our onions, we did not find a single vole tunnel in that bed. I am sold on the efficacy of Plantskydd.

We grew two varieties of onions this year:

The onion bed on April 30 with an adjacent bed of young salad greens behind it. Candy onions are on the left end; Yellow Granex plants are on the right end.

Spring rains came fairly regularly this year, which hasn’t happened in quite a few seasons. It had also rained enough during the winter to fill the shallow well that I use to water the vegetables; this has not often been the case in recent springs. My onion bed received about an inch of water every week from late February through the end of May. I’m fairly certain this was the other reason our harvest was so successful.

Onion bed just before first harvest on May 25.

Onions are ready to harvest when the green stem at the base of the leaves where it attaches to the bulb flops over. The Yellow Granex plants (left end in the above photo) flopped over before the Candy plants surrendered to Summer’s impending arrival.

We hung the harvested Yellow Granex bulbs — leaves still attached — to anything handy in the garage. In this case, our push mower was drafted into onion-curing duty.

The heat of early summer, perhaps combined with the disturbance created by harvesting the Yellow Granex end of the bed, seemed to push the Candy bulbs into accelerating their production cycle.

By May 31, some of the Candy plants were flopping over, ready to be harvested.

I kept watering as needed, trying to encourage the last of the Candy plants to push just a few more bits of goodness into the maturing bulbs. But by June 19, we had pulled up the last of this variety. 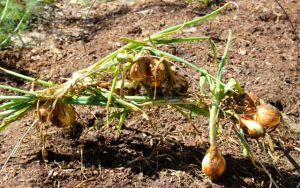 The last of the Candy onion harvest on June 19.

I pulled the onions in the early morning, then left them on their beds for an hour or so, allowing the skins to toughen up a bit before I moved them to the garage. We found that the Candy onions actually tasted sweeter after we let them rest in our cool basement for a month or so. In the meantime, we devoured the Yellow Granex bulbs, since we knew they wouldn’t store as well.

One of Wonder Spouse’s favorite ways to cook our onions is to marinate them briefly with other summer veggies — such as squash, tomatoes, and fat portobello mushrooms — and then grill them just long enough to heat them up and give them a bit of yummy charred goodness.  Whatever meat he added to the mix played a distant second fiddle to those sweetly zingy grilled onions. My mouth is watering from that tasty memory as I type this.

I will definitely be employing my Plantskydd methodology for next spring’s onion crop. It will be interesting to see if I can repeat — or even better — my results. I used this product in a couple of other ways in my vegetable garden this year. I’ll tell you about those techniques soon, as I continue to review this year’s growing season.

Young pepper transplants in front of maturing onions on May 25. These peppers are still producing, thanks to an unusually prolonged, frost-free fall.

Spring vegetable season screeched to a halt about three weeks ago when the rains disappeared. Drought plus heat plus voles equalled the rapid surrender of the spring greens. Lettuces and spinaches turned bitter and bolted. Yellow Granex onion greens fell over, refusing to push more food into the sweetly pungent bulbs. We yanked out everything but some pitiful (but still growing) carrots and a few smaller beets.

For the first time in our 25 years growing veggies here, the voles actually ate the onion bulbs! Never in my life have I seen this. Carrots? Sure. Potatoes? That’s why we use the potato bags now. But onions? See for yourself:

See how they ate the ENTIRE bulbs?

We hadn’t planned to pull up the onions and beets, but after Wonder Spouse pulled up a gnawed onion, we dug up anything of any size at all. Here’s about half of the pitiful onion harvest: 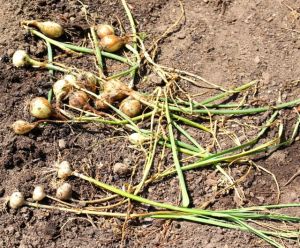 Vole tunnels undercut the onions so thoroughly that they never got enough water or nutrients to grow to a decent size.

We found thoroughly chewed beets too, which is why we pulled them up. Fortunately, the voles left more of the beets alone, apparently favoring the onions — go figure. Here’s the beet harvest:

The beets were mostly able to attain a decent size.

We ate some of these beets for dinner last night, and they were wonderful. Organic beets at the grocery stores have been unimpressive at best. Our freshly harvested purple-red globes were sweet, with an earthy undertone that added richness to the palate. We wish we had grown more.

I do still have a few later-sown beets growing, along with the slow-to-germinate-and-grow carrots, but unless the rains return and the heat backs off, I’m not hopeful about their outcomes.

Sweet Treats cherry tomato nears the top of its trellis.

The evil <expletives deleted> voles even undercut one of my Carmen pepper plants. I am seriously hating those rodents this year. But the tomatoes are tall and full of expanding green globes of future goodness. The beans are tall and full of flower buds. The first zucchinis are nearly large enough to pick.

I haven’t yet had the heart to pull out the vole-damaged pepper.

If only the rains would come. Oh, they’re all over the radar — green globs of precipitation raining on everyone’s house but mine — so it seems, anyway. Theoretically, we still have chances the next few days. I’m trying to hold on to hopeful thoughts.

But even the Cope’s Gray Tree Frogs that had been singing lustily whenever a cloud crossed over have gone silent. Have they given up? Maybe they’re just saving their energy for a night of rainy love calls beside our front water feature, which is already nearly overflowing with tadpoles of varying sizes.

Wonder Spouse is muttering about buying more grow bags. Given the success he’s had with potato bags, he’s wondering if the way to beat the voles is to grow onions and beets in these containers too. We think perhaps our deer fence has discouraged black snakes from visiting our garden. Frankly, I may just grab the next one I see and carry it inside the garden fence. Surely it would forgive my interference for the chance to grow fat and happy feasting on our vegetable-fed voles.

On a happier note, the flowers are still mostly doing well, suffering only a few vole-related insults. And although most of the butterflies remain no-shows, the dragonflies are appearing in increasing abundance daily. And last night was the first time we saw hundreds of fireflies flashing luminescent messages to each other — first at ground level, then gradually dancing through the treetops as the night sky deepened to black. Always, Mother Nature provides compensations for the frustrations. I just have to remember to look for them. 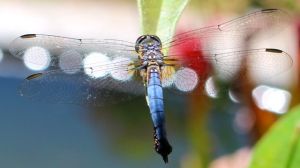 If only I could persuade the sky dragons to eat voles…