The Power of Water

Posted by piedmontgardener in piedmont gardening, Vegetable Gardening on July 7, 2014

Week seven here with only 0.43 of an inch of rain during that time, and that was almost three weeks ago. It is heart-wrenching to watch five acres of once-healthy  Piedmont plant life wither, yellow, and die. Those are wildflowers I grew from seed a few years back. By now, they should be full of yellow composite flowers topped by dancing butterflies. Not this year.

Leaves curl in a futile attempt to conserve water.

The most depressing part about the above pictures? I took them before nine in the morning yesterday, long before a ray of sunlight touched them. They are in a chronic, perpetual state of wilt. I doubt a deluge would bring them back now.

The great canopy trees only show signs of water stress when the sun beats on them in the afternoons. They are conserving water by dropping their fruits prematurely. Tiny acorns and pecans litter the dusty ground. And the massive black cherry that was loaded with fruits was unable to carry them to juicy ripeness for the Pileated Woodpeckers who love them. Instead, shriveled fruits litter the dry ground beneath it. 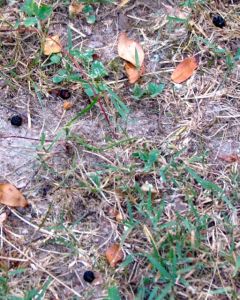 I’ve shown you the tiny pond on our floodplain before; its water level reflects the state of the perched water table in that part of our yard. Two months ago, it was full to the top and overflowing out the other side of its overflow pipe. This is what it looked like yesterday morning. 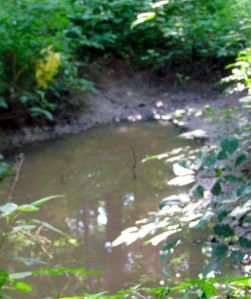 A puddle, not a pond.

Here’s another view, so you can see how much the water line has dropped. 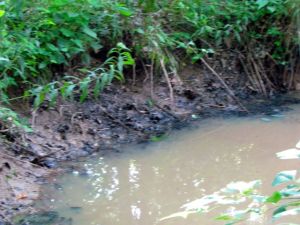 The creek is equally low, because it’s fed by springs from the same perched water table. A stagnant thin string of water wends its way into the drying swamp. This would be quite bad enough, but the worse news is that the ten-foot-deep well we use to water our vegetable garden pulls from this same rapidly dropping perched water table.

With high-ninety-degree temperatures forecast for the next few days, I doubt I’ll have water for my veggies much longer. Hurricane Arthur passed by a mere 150 or so miles to our east a few days ago without dropping a single raindrop on my thirsty yard. I’m starting to wonder if our sky has forgotten how to rain.

For the moment, we harvest and rejoice in the bounty. Blackberry patches on the floodplain feed the wildlife. 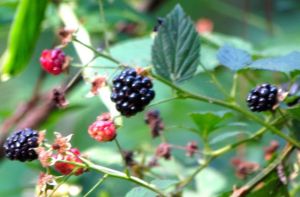 The abundant blackberries have bought me time to harvest blueberries from our bushes without having to argue too much with the feathered folk. The berries are not as big and juicy as they are some years. But their flavor is bright, concentrated, and quite tasty mixed with plain yogurt or sugared in a fresh-baked crumble.

I’m doling out water to the veggies twice a week, timing how much each plant receives. It’s not as much as they’d like, but it’s enough to keep them going. I watered yesterday morning for about an hour, dutifully counting the seconds of precious liquid each vegetable received.

Wonder Spouse harvested his first bag of potatoes yesterday. From his one-pound investment of Viking Purple seed potatoes, his yield was six pounds of perfect tubers, unmolested by the voles which plagued the crop before he switched to this methodology. 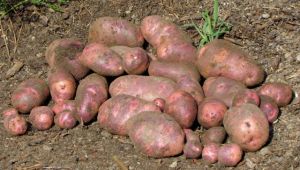 Today’s garden harvest demonstrates the power of water vividly. For now, our table is full.

Today we cherish the harvest, freezing what we can’t eat immediately, because we know that it won’t take too many more rainless tomorrows to end these gifts from the garden.

You may recall that Wonder Spouse, a devoted fan of potatoes in in their myriad culinary forms, had grown frustrated with growing spuds in our lovely soil. The potatoes grew magnificently, but the voracious voles ate at least half the crop. Like so many varmints, the voles wouldn’t devour whole potatoes, preferring to nibble a bit on most of them, which caused steam to escape Wonder Spouse’s ears, even when he wasn’t standing in the summer sun.

When Wonder Spouse spied grow bags on sale in one of the thousands of gardening catalogs that fill our mailbox, he was intrigued — and hopeful. Would growing his beloved spuds within the grow bags protect the tubers from vole predation — and still produce acceptable yields? Thus was born The Great Potato Experiment.

We bought three of the largest size grow bags and, after much agonizing over the potato catalog (What — you didn’t know there are whole catalogs devoted to spud sales?), Wonder Spouse selected three potato varieties: a fingerling, the name of which escapes me, Viking Purple, and Bison. In my area, you can find Bisons in the farmers’ markets and speciality grocery stores, but we’ve never seen WS’s beloved Viking Purples anywhere. He purchased a pound of seed potatoes of each variety, and when early spring arrived, planted them in the bags — one bag for each variety.

He created his own soil mix — a combination of compost, leaves, and our lovely soil, filled each bag a third of its height, and planted the seed potatoes. As the plants grew tall, he unfolded another third of the bag, filling in with soil, in the hopes that more tubers would form at this level. When the plants grew tall again, he unfolded the final third of the bags, filled them with soil, and settled in to wait for harvest time.

The plants grew well and appeared quite vigorous. They didn’t bloom much. Traditionally, blooming marks the time when you can steal a few new potatoes — just to tide you over till harvest. However, Wonder Spouse didn’t want to disturb the bags even to forage for new potatoes. So we waited.

The fingerling plants faded first. I neglected to photograph the harvest — sorry about that. But his one pound of seed potatoes yielded about 5.5 pounds of fingerling crop — an acceptable yield. All potatoes were perfect in form, unmolested by varmints, and delicious every way they were cooked.

During a brief sunshine episode during our Wettest Summer Ever during the July 4 holiday, Wonder Spouse harvested the Viking Purples in the above photo, and the Bisons, shown below. No doubt about it, they were perfect potatoes — no blemishes, no chew marks, just superlative-looking spuds. For his one pound each of seed potatoes, Wonder Spouse harvested right around 8 pounds of potatoes. Although this is an excellent return on his investment, Wonder Spouse still wishes he had gotten more potatoes out of each bag.

To that end, he has decided to revise his methodology slightly for next year’s crop. He noticed that all the potatoes were at the bottom of the bag. No potatoes formed as he pulled the bag higher and added soil. He suspects (and I agree) that the soil mix he used was probably too heavy to stimulate new potato production higher up on the plants. Next year, he is planning to fill the top two levels with shredded leaves, mixed with just a bit of compost. He’s hoping the lighter mix will encourage potato production at all three levels.

Also, and especially if we spot the bags on sale again in late summer, we will invest in three more bags. We have a dry, cool basement where potatoes store very well. Twice (or more) the amount of spuds we got this year will not go bad before their enthusiastic consumption, of that you can be sure.

My guess is that Wonder Spouse will end up purchasing six different varieties of seed potatoes, one kind for each bag. Among the hundreds (yes, hundreds) of potato varieties out there, Wonder Spouse insists he can taste, see, and feel the subtle differences, and I’m sure he can. I don’t (affectionately) call him Mr. Potato Head for nothing. 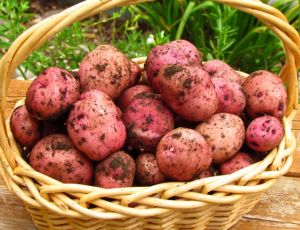