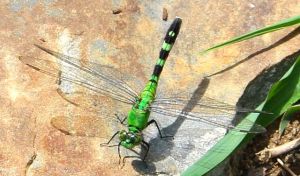 The heat and humidity have begun to wear on plants as well as humans in my patch of Piedmont. I saw a notice from a local extension agent that dreaded basil mildew disease has been spotted. I think it held off longer than usual — as did most of the fungal diseases — because our June was unusually dry and hot.

July has brought heavy, but scattered rains, and lingering humidity and heat. Fungal diseases are certain to soon plague my tomatoes, and perhaps the beans. The vegetables, while still producing well, are looking a bit tired. Many flowers are still blooming well, which the abundant insects are clearly appreciating.

The nearly butterfly-free summer continues at my house. Iridescent members of the dragonfly clan dominate the thick air, causing me to worry about the fate of the few butterflies I am seeing. The rains have finally brought around a few butterflies, I’m happy to say. 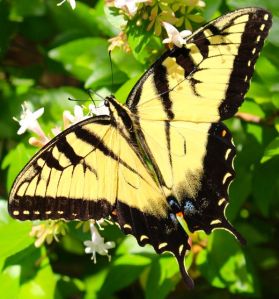 This Eastern Tiger Swallowtail was enjoying the Chinese Abelia flowers that finally opened after we got some rain.

No clouds of Eastern Tiger Swallowtails this year, but a few are passing through from time to time. Pearl Crescents (I think that’s what they are) are easily the most numerous butterflies on my flowers.

I spotted a couple of dark swallowtails over the last few days.

Also on the Chinese Abelia flowers

And this one high up on a dogwood yesterday was drying out after a bit of rain from the previous evening.

My happiest butterfly moment of the summer so far was this Red Admiral sunning itself on my driveway yesterday. This is the first one of this species I’ve seen all year.

More numerous — by a bit — than the butterflies are the sphinx moths, also called hummingbird moths, because their mostly clear wings vibrate as quickly as those of hummingbirds as they hover beside flowers to drink nectar. As an amateur photographer, I find them very frustrating to capture. But I’ve gotten a few almost decent shots over the last few days, if you’ll indulge me. 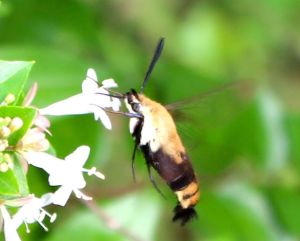 This is typically how I see them, wings nearly invisible as they hover for a drink.

In this hover shot, you can at least see the outline of their wings.

Yesterday, I saw one spread out on a tomato leaf sunning itself in the early dawn light. We had very heavy dew on the ground, and I think it was drying itself.

Finally, you can actually see its beautiful wings in this shot.

And a final profile shot as it rested on the tomato leaf:

These creatures are so ethereal as they almost perpetually dance among my flowers that I think of them as tiny angels blessing my efforts.

I’ll close this photo post with a few flower shots to show you what the insects are enjoying. 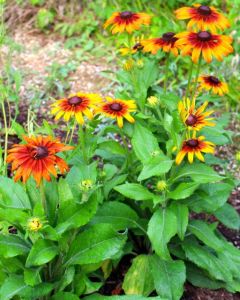 Seed-grown Rudbeckia ‘Cappuccino’ has turned into a stunning plant seemingly oblivious to the heat and humidity. Score!

Echinaceas in the boulder garden are covered in pollinators from dawn to dark. That’s a rosemary plant in the middle. It loves the heat from the sun-warmed rocks. 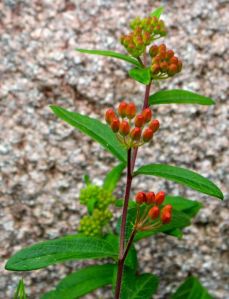 The milkweeds I added to the boulder garden last fall continue to bloom — repeatedly! This butterfly weed (Asclepias tuberosa) is on its second round of bright blossoms.

The rain made the weeds explode into productivity, of course. My gardening to-do list grows ever longer, while my enthusiasm for working in the summer weather continues to wane. Still, for fresh-picked blueberries, juicy tomato sandwiches, and a dazzling array of pollinators, I’ll endeavor to keep up as best I can.

Stay cool and hydrated, ya’ll. Fall planting season will be here before we can turn around twice.

This summer growing season has been a tough one for me. It started out slowly, because colder-than-normal temperatures lingered into early May. Then it stopped raining at my house for six weeks. During that time, my garden never saw more than two-tenths of an inch of rain, and that only every few weeks. We’re talking dust bowl. Add June temperatures that — for 16 days in a row — hit 90 degrees or better, with several well into the low 100s, and you’ve got seriously stressed vegetables.

My zucchinis quickly expired. One day they were lush and productive; the next day they were wilted and dying. When I pulled them, they had almost no roots. I’m fairly certain the voles did them in. They also got one of my Carmen Italian pepper plants in the same bed. I’ve still got three pepper plants surviving, I’m happy to report.

Finally, a few days ago in 48 hours, we got 3.5 inches of blessed precipitation. A tiny bit of dime-sized hail also hit us, but not enough to hurt anything severely. Strong thunderstorm winds also knocked things around a bit, but again, nothing that a bit of re-staking couldn’t repair.

My beans and tomatoes had quit growing when the heat wave/drought hit. I was keeping them alive by doling out my limited supply of water every other day, but they were not happy plants. Then the rains finally came, and you could hear the beans shouting, “Yippee!”

Fortex beans are blooming and setting fruit again, now that the heat has backed off.

In the foreground of the photo above, you see the bean trellis. My Fortex pole beans on the right side have scaled the top of the trellis and are heading back down the other side. I grow Jade bush beans on the left side of the trellis. I long ago learned that so-called bush beans are not really bushy, by which I mean they don’t stand sturdily upright on their own. You must provide some kind of support. The simplest solution for me is to grow them on either side of a trellis and gently tie them to it as they grow tall and floppy.

I have grown the same two varieties of beans for a number of years. I’ve tried plenty of others, but I haven’t found any that match the consistent quality of Jade and Fortex. The Jades produce a typical-looking green bean — a deep Jade green color. The flavor is rich, but lighter than the meatier flavor of Fortex pole beans. We eat them both lightly steamed, and the Jades are excellent cold in salads. This time of year, we eat beans almost every night — not just because we have so many, but also because they taste so darn good.

We’re also eating tomatoes every day. This year, I limited myself to only four varieties (in my youthful years, I’d grow 8-10 varieties): 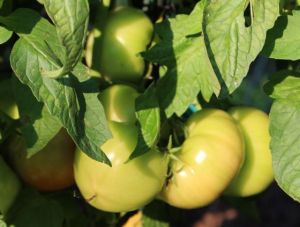 I still have a few sad-looking carrot and beet plants in the ground, but the heat wave really pounded them. I’ll be amazed if they produce anything edible.

Wonder Spouse has not pulled his potatoes yet. The Purple Vikings still look vigorous, despite the heat. The Kipfel fingerlings and the Dazocs are looking kind of ragged. Wonder Spouse is planning to dig into them this weekend to get a sense of their tuber size and condition. Stay tuned for further developments.

The flowers I grew from seed have hung in remarkably well with very little water from me. Some of the perennials are actually going to bloom this year, which doesn’t always happen.

This year’s bed of zinnias

Have a great Fourth of July, ya’ll.