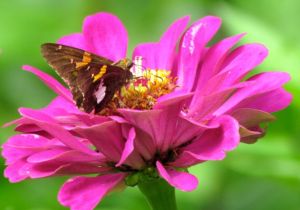 One of the suddenly abundant Silver-spotted Skippers enjoys a refreshed zinnia.

Two months to the day after the last drenching, inch+ rain event on my yard, the rains finally returned. My rain gauge registered almost exactly a two-inch total for the event. Of course, the airport a mere 30 miles away measured over twice that, but I’m willing to overlook that this time.

The only puddle that remained by this morning was in the driveway, and its size was modest compared to previous puddles. When I walked the floodplain this morning, the ground was not muddy anywhere, but it was at least not dusty anymore. And the grass grew half a foot overnight, of course.

Even though the rains came down hard for much of the event, little managed to run off into our creek. I know this, because the creek water level is still quite low. The water is muddy, but barely flowing — still an improvement over the thin thread that occupied that space a few days ago.

The little pond I showed you in my previous post is not full to the top, but the level did rise. Compare the following two photos to those in the previous post.

The pond level rose, but not to the top.

Compare this to the close-up view from my previous post: 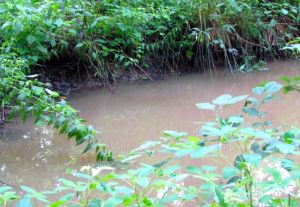 Better, but not ideal.

Last weekend, Wonder Spouse decided to harvest his remaining two potato bags. The heat and drought were making the plants look pretty sad, and he was worried the tubers below might be adversely impacted if he waited any longer.

I showed you the harvest of Viking Purple potatoes in the previous post. All three varieties Wonder Spouse grew this year began as a pound apiece of seed potatoes. From that, his yield was 6.3 pounds of Viking Reds.

Marris Piper yield with a pine cone for scale.

Potatoes are never tastier than when they are freshly harvested, and we have been enjoying frequent potato feasts. Any way you prepare them, the flavor is astonishing if you’ve never eaten anything but old tubers from the grocery store bins.

The other vegetables remain productive despite the drought. In fact, I suspect that the drought is the reason they are still doing so well. During last year’s highly unusual rainy, cool summer, the beans, tomatoes, and squashes all succumbed to fungal diseases quite early in the summer. This year, I’m still picking lovely zucchinis. Two of the six plants have surrendered to the evil squash vine borers, but the other four are still valiantly producing, aided, I suspect, by numerous enthusiastic honeybees from my neighbor’s hive. Thanks, neighbor! 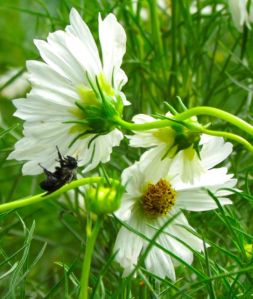 A soggy carpenter bee dries out beneath a cosmos flower, where it likely sought shelter from yesterday’s rains.

Speaking of pollinators, the almost completely absent butterfly population is finally showing signs of returning, no doubt aided by recent rains. The local experts on the lepidoptera (butterflies and moths) chatlist are theorizing that the previous unusually cold and sometimes wet winter killed most of the overwintering larval stage of these insects. We’re finally beginning to see some, probably migrants from areas that weren’t so adversely impacted.

So far in my yard, I’m still seeing almost no swallowtails, but the little skippers and other small butterflies are now showing up in the numbers I expect, especially now that the flowers have been fortified by adequate (for now) rain.

A battered Pearl Crescent rests on a milkweed leaf. I’ve seen no Monarchs this year, alas.

I did spot the first bright green Praying Mantis of the summer a few days ago. It was loitering in a marigold growing next to my beans. I usually don’t notice these predators until about this time of year, as they grow larger in preparation for egg laying.

Speaking of egg-laying, just before the rains hit yesterday afternoon, I noticed the Carolina Wrens nesting in a pot on my back deck were covertly flying back and forth — a sign that at least one of the four speckled eggs they’d been tending had hatched. I tried to get a peek this morning, but only managed to annoy a damp Mrs. Wren snuggled inside the nest. 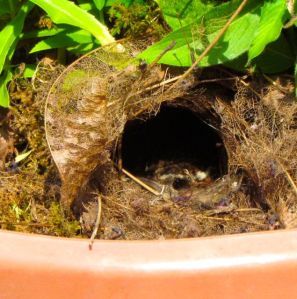 That’s her unblinking eye staring at me.

A bonus with the rain is an influx of below-normal cooler and drier air, which is predicted to linger for several days. For me, that means I’m out of excuses regarding weeding and other plant-maintenance tasks. But with moistened ground and a refreshing air mass, digging in the dirt will be a pleasure, not a hardship.

The rains are predicted to return in a few days. Perhaps now that my yard has been re-moistened, some of the future juicy clouds will choose to visit soon.

Here’s hoping all our gardens receive the rain they need to flourish.