Posted by piedmontgardener in Favorite Plants, piedmont gardening on December 7, 2011 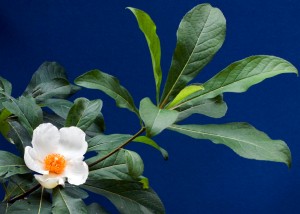 Of the many special tree species I’ve added to our five acres over the last 21 years, I think I may be most proud of my success with the Franklin Tree (Franklinia alatamaha). It was discovered growing on the banks of the Alatamaha River in Georgia in 1765 by the botanizing father-son team of John (father) and William Bartram. John was a Pennsylvania Quaker, uneducated but fascinated by the flora and fauna of the New World. The Franklin Tree — named for John’s good buddy, Benjamin Franklin — is considered by many plant lovers to be this team’s greatest botanical find.

The Franklin Tree is special for many reasons: the delicious rose-like scent of its pure white, Camellia-like blooms, its shiny, long, deep green leaves, and its vivid garnet fall leaf color, which in good years, frames a few late-blooming flowers, for this tree is a late summer bloomer. It’s a member of the tea family, kin to Stewartias and Gordonias. But what makes this tree treasured by plantaholics is its backstory.

You see, Franklinias disappeared in the wild after 1803; that was the last year anyone saw one growing in its native habitat. Luckily for botanizers, before then, William made a trip back to this tree’s territory and collected seeds, which were propagated in the Bartrams’ Philadelphia garden. All Franklinias growing today are descended from the Bartrams’ seed-grown stock.

The link in the first paragraph above tells you everything you need to know about where and how this tree is grown. It is quite particular about its growing requirements, which may be why it disappeared in the wild. However, if you can provide the right conditions for this tree, I encourage you to give it a try.

I’ve got two in my yard at the moment. One is about twelve feet tall; the other is smaller and younger. They’ve struggled these last few summers, due to our unrelenting drought. Wonder Spouse saved them by lugging water from the creek in buckets, pouring just enough on their roots to keep them going.

I love my Franklinias because they are exquisite trees, because I like playing a small part in perpetuating the species, and because they remind me of my favorite New World botanical hero: William Bartram.

Unlike his father, William was a well-educated man. His childhood fascination with the flora and fauna of his homeland led him to acquire formal training in botany. I suspect he loved his botanizing explorations of the New World more than just about anything else in his life. I base my suspicions on his well-known book: Travels through North and South Carolina, Georgia, East and West Florida, the Cherokee Country, the Extensive Territories of the Muscogulges, or Creek Confederacy, and the Country of the Chactaws. First published in 1791, it was all the rage on both sides of the Atlantic.

William’s book is not a dry listing of species by a scientist. It’s more of an enthusiastic and poetic love story. He seems to have appreciated every aspect of the world he explored, right down to the summer downpours that slowed his progress, and the alligators that lurked nearby as he canoed Florida swamps. And oh how he loved the plants.

I’ll give you a small sample. In late April/early May of 1776, he was traveling out of Georgia into the mountains of North Carolina. Anyone who has hiked the river valleys of that area knows the lushness and beauty of the region. William noticed too:

How harmonious and sweetly murmur the purling rills and fleeting brooks, roving along the shadowy vales, passing through dark, subterranean caverns, or dashing over steep rock precipices, their cold, humid banks condensing the volatile vapours, which fall and coalesce in chrystaline drops, on the leaves and elastic twigs of the aromatic shrubs and incarnate flowers.

Can’t you just see the misty waterfalls? I’ll leave you with his description of Flame Azaleas (Rhododendron calendulaceum), which he stumbled upon as he hiked this area. You may recall that I wrote my own little testimonial about this deciduous azalea here. This is what William had to say:

The epithet fiery, I annex to this most celebrated species of Azalea, as being expressive of the appearance of it in flower, which are in general of the colour of the finest red lead, orange and bright gold, as well as yellow and cream colour; these various splendid colours are not only in separate plants, but frequently all the varieties and shades are seen in separate branches on the same plant, and the clusters of the blossoms cover the shrubs in such incredible profusion on the hill sides, that suddenly opening to view from dark shades, we are alarmed with the apprehension of the hills being set on fire. This is certainly the most gay and brilliant flowering shrub yet known…

I couldn’t have said it better myself. 🙂