A Bird in the Hand

Last week was too hot here, the heat made worse by the fact that most of the summer was unusually mild. Dust clouds rose with the slightest disturbance, lingering long in humid, stagnant air. It was not a week conducive to gardening.

Finally this past Sunday, cooler weather began to creep in, accompanied by clouds that dimmed what had been searing sun. Wonder Spouse immediately charged outdoors to catch up on tasks delayed by the heat, leaving our garage door open as he moved back and forth fetching tools, wheelbarrows, and assorted other necessities. His tasks did not require a second pair of hands, so I grabbed my camera and began acquainting myself with the latest developments on our five-acre jungle.

Fruit — that was the takeaway message from this walk. Most plants are well into fruit/seed production, clearly aware of dwindling daylight and down-trending temperatures. The Solomon’s Plumes I added to a wildflower bed on the north side of my yard all made numerous berries this year, as you can see in the photo above. The empty stems you see likely tell the tale of a hungry bird or other critter sampling these bright red berries. I think they look especially festive mingling with the evergreen Christmas fern — another native to our region.

Giant magenta stalks of Pokeweed — easily 8 feet tall — bend from the weight of purple-black clusters of ripe berries. These are favorites with many of the avian inhabitants of my yard, as evidenced by purple-tinged splats of bird excrement deposited on my walks and decks. 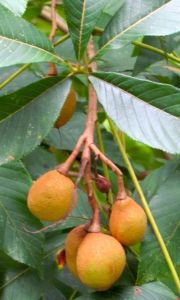 Branches of the large Red Buckeye on our floodplain are touching the ground, bent from the weight of nearly ripe fruits. Soon the husks will split and the shiny nut-like fruits will tumble to the ground. These nuts are poisonous to people, but some wild inhabitant makes them disappear every year.

The greatest surprise during my walkabout was my Hammocksweet Azalea — in full, overpoweringly fragrant bloom at the base of my north-facing garden, close to the creek. I sited it there, because this deciduous azalea — the last to bloom for me every year — is native to wetland environments. The flowers are pure white, without a hint of ivory, and their fragrance is knock-your-socks-off sweet. If it were any closer to my house, I think the fragrance might be overpowering, especially as this shrub continues to grow.

September is the month that many large native yellow composite wildflowers adorn every corner of my yard, and many roadsides. I added Green-Head Coneflower to the mix, because I love the prominent seed heads it forms, as do the seed-eating birds that dwell nearby.

My vegetable garden is mostly done for the year. A few peppers linger, and some broccoli plants are struggling to grow beneath the shelter of their Reemay tent. Many of the beds are packed with fresh green sprouts of crimson clover, my winter cover crop of choice. But one bed is dominated by the lovely mix of nasturtiums above. Unimpressed by heat, drought, deluges, or anything else as far as I can tell, they bloom continuously, spreading wandering shoots in all directions, even mingling a bit with adjacent beds full of crimson clover. Their gentle rose-like scent is nothing short of heavenly.

I encountered a bit of wildlife as I made my way around my yard. I think perhaps they’d been hunkering down during the heat wave too. Like me, they were out and about in force during my morning walk. Bird song filled the air. Many toads greeted me in all parts of the yard. I’m always happy to see these insect-eaters. A Green Anole rushed out of a potted plant when I began watering it. It was bright green to blend with the vegetation, and if it hadn’t objected to being watered, I likely would have never noticed it. Five-lined skinks skittered across open ground and up and down trees. A Black Racer darted beneath an aster blooming by my front deck when I got too close; it had been trying to warm itself in the cloud-dimmed sun.

But the highlight of the day came after I had put up my camera and gone back outside to gather some tools in the garage. A frantic bird fluttered at the back windows, too confused to realize that its way out was the other way, through the open garage door.  It was an Eastern Phoebe, a small flycatcher common to my yard, thanks to the woodland creek — its preferred habitat — that borders our land.

I have spent many happy hours watching this beauty hunt from my back deck. Its keen eyes watch for flying insects. When it spots one, it leaps into the air, grabbing the bug on the wing, then returning to its perch to watch for more tidbits. Its aerial acrobatics are impressive, and its squeaky call, sounding more like a child’s squeeze doll than a bird, let’s me know it’s on bug patrol.

So when I discovered this distraught Eastern Phoebe desperately trying to escape our garage, I leapt into action. First, I opened all the other doors. Often this is enough to help a trapped bird find its way out. But this little one was unwilling to venture from the high window at the back of the garage. I next tried using a light-weight rake to reach up toward the bird, in the hopes that it would hop on and let me carry it out. This works surprisingly well with the occasional discombobulated hummingbird.

But not so for this Eastern Phoebe. Instead, it fluttered down the back wall, settling on a piece of plywood leaning against the wall, and mostly hidden by another, taller piece of plywood. I did the only thing I could think of. I quietly asked the little bird if it would allow me to pick it up with my hand and carry it to safety. It didn’t move, probably exhausted from its fruitless escape efforts. I chose to interpret its stillness as permission, gently reaching behind the plywood.

The poor, exhausted creature didn’t even struggle in my gentle grasp. I quietly thanked it for its cooperation as I carried it toward the front of the garage. I could feel its heartbeat thrumming through my fingers, otherwise feeling no movement. But as soon as we were clear of the garage, the soft brown bug hunter in my hand began to push against my grasp. I opened my palm and it immediately flew high into a nearby tree, apparently none the worse for its misadventure.

I closed all the garage doors to prevent further accidents, still feeling the heartbeat of that beautiful wild creature in my hand. Not for the first time, it occurred to me how blessed I am to live among the wild ones on our five acres of green chaos. So many people live their entire lives without ever feeling what it’s like to hold a bird in the hand.

Posted by piedmontgardener in Native Wildlife, piedmont gardening on May 13, 2013 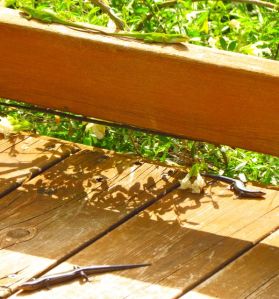 My front deck is the reptile rendezvous of choice.

Early May has brought out the reptiles in abundance at my house. Almost every time I walk anywhere on our five acres these days, I see/almost step on a snake or lizard. Amphibians of numerous species are also ubiquitous. I encountered two very large toads in different parts of the vegetable garden yesterday as I planted my summer squash seedlings.

A week or so ago, early afternoon brought out two lizard species on our front deck. We couldn’t miss them, because they were basking/interacting just outside our front door. Those are Green Anoles on the railing, of course. I’ve written about them several times, including here. They like that railing, and we see them there often.

The new additions were the skinks loitering on the deck below. They are either Five-lined Skinks or Southeastern Five-lined Skinks. The two species are very similar; apparently the experts distinguish between them by examining scales on the undersides of their tails. I wasn’t about to traumatize them or myself by trying to catch them for closer examination.

At first, I thought the Green Anoles were engaging in courtship behavior, but the longer I watched, the more I thought that perhaps it was a slow-motion reptilian territorial dispute. The most action occurred when one of them caught a small butterfly that was visiting one of the white salvia flowers growing beside the railing. Just as one anole caught its prey, the other rushed it, jostling it, so that it released the fluttering victim, which flew away as the two anoles settled in for more slow motion space wars.

The nose-to-nose staring contest lasted for many minutes.

One was clearly shedding the skin off its tail. Maybe this makes it extra grouchy?

One occasionally inflated his throat pouch. The other never did, which is why I suspected it might be female.

The skinks were much less active than their green friends. They seemed content to stay nearly immobile, soaking up sun and ignoring me as I moved around trying to get better camera angles on them without startling them.

Those are White Texas Sage flowers. 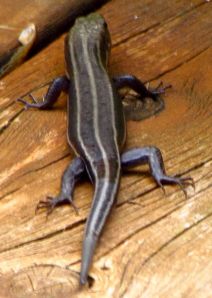 This one was larger and wider and had no blue on its tail, which I think means it is older than the other one.

This one was more shy, hugging the edge of the deck for a quicker escape. Note the blue tinge to its tail.

Skinks and Green Anoles are all welcome in my yard and garden, of course. Any critter that eats some of the ten gazillion bugs that occupy my garden is welcome. For every butterfly they devour, they almost certainly eat more unwelcome insect pests. I’ve read they eat spiders, too, and I’ve noticed fewer of the eight-legged creatures lingering around my front deck. Perhaps the lizards have reduced their numbers somewhat?

At least one large snake also occupies the area around our front deck, although it is not audacious enough to sun itself on the deck with the lizards (thank goodness!) I suspect it is the same Black Rat Snake I wrote about here, because of its size, but I can’t be certain. I almost stepped on it the other day as I was weeding around a daylily, and last week, it left me a present coiled around the large Spanish Lavender bush that thrives against the front of my house:

It’s a little hard to see in the above shot, but the shed skin is quite long. I got out a yard stick, gently eased the skin away from the lavender, and laid them side-by-side on a garden bench for comparison:

Four feet long, give or take a few inches.

You can tell the former owner of this skin was not only long, but relatively thick.

I’m happy to report that it’s not just the cold-blooded clan that love the habitat-rich environments we’ve created for them. Bird song by many species begins before the sun has done more than hint at the arrival of a new day. All the summer visitors are here now: Summer Tanagers, Yellow-billed Cuckoos, and too many warblers to ever distinguish. The Red-breasted Nuthatches finally left for their northern breeding grounds. I’ll miss their bold visits to the suet feeders as I tried to re-fill them.

And don’t get me started on the summer weeds. My knees may never forgive me for the relentless torture I’ve subjected them to as I’ve tried to plant vegetables amid predictions of wildly varying temperatures.

Reptiles have it far easier in that regard. I suspect that knee pain is rarely, if ever, an issue for them.