Native Shrubs for your Piedmont Landscape

With a little planning and minimal effort, one of the fastest ways to enhance your home landscape is through the addition of shrubs. Most folks in the southeastern Piedmont are in shrub ruts, thanks to the overuse of the same few bushes by landscapers of new subdivisions and commercial buildings. A few of those overused shrubs — like Wax Myrtle — are native plants, and so provide food and shelter for wildlife without the invasive tendencies that many non-natives exhibit. But boxwoods, grape hollies (Mahonias), and evergreen azaleas are not native. And the invasive tendencies of Mahonias in our native wetlands is an increasing concern to ecologists. 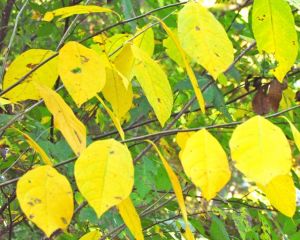 Today I encourage you to think beyond standardized Piedmont shrubbery. It’s time to consider adding some of our many gorgeous native shrubs to your home landscape. There’s a native shrub for any growing conditions you may have. Some can attain the size of small trees, such as a mature Bladdernut. But others remain just a few feet tall without the need for pruning, including some deciduous azalea and blueberry species.

The advice I offered in my previous post about tree planting applies equally to shrubs. Understand the site where you want to add your shrubs. Is it at the top of a sunny hill? Shaded by larger trees or buildings? In a low spot where rainwater collects? Clay soil? Sandy loam?

When you know the answers to those questions, if the area in question is not already a mulched bed, take the time to create a bed. Break up the soil, work in compost or other organic material to create a moist, loamy planting site. When you add the shrubs, be sure to gently stretch out any roots that might be winding around the interior of the pot. Be sure the level of the dirt in your bed matches where the dirt in the pot touched the base of the stem.

Water in your new addition, then mulch the bed with an inch or two of organic mulch — leaves, wood chips, bark — any of those will do nicely. As with new trees, your new shrubs will need a bit of pampering for their first year of growth. If your area goes into drought, water your newbies. Don’t worry about fertilizer. Native shrubs in a well-prepared planting site don’t need it and don’t really want it.

If you’ve read much of my blog, you’ve read about a number of native shrub options worthy of any Piedmont landscape. Here are a few for your consideration.

The southeastern US is home to spectacular native deciduous azaleas, and I’ve described all the ones I grow in this blog. If you search on deciduous azalea, you’ll find the relevant entries. The one here is probably mostly Rhododendron austrinum, but it was listed as a hybrid in the catalog. Talk about making an impact in the spring landscape! Not only are its numerous flowers impossible to miss, their fragrance is equally impressive, and utterly heavenly. The spring-blooming deciduous azaleas mostly do so before their leaves emerge, thereby increasing their visual impact. The summer bloomers, like Plumleaf Azalea, bloom after leaves appear, but the visual impact still stops visitors in their tracks. 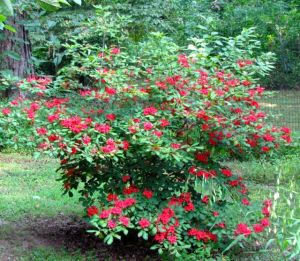 Not all deciduous azaleas are fragrant, colors range from pure white to pale yellow to deep gold to rich pinks, oranges, and deep crimsons. Sizes and site requirements vary too. Truly, there is a native azalea ideally suited for almost any growing condition.

Because they drop their leaves in fall (after a spectacular fall leaf color display), deer mostly ignore these shrubs in the landscape. Every once in a while, one will bite off a flower bud in winter or grab a mouthful of summer leaves as it walks past, but deer don’t seem to want to devour this shrub, as they will with Virginia Sweetspire, for example. The deciduous azalea native to my area is Pinxterbloom Azalea (see top photo). I have a ten-foot-tall-and-wide specimen growing on the slope to my floodplain that has always been completely unprotected. The deer eat nearby plants, but ignore the giant Pinxterbloom Azalea.

In my yard, even small, newly planted deciduous azaleas usually begin blooming within the first three years, most sooner than that. Try them; you will not be disappointed.

If you’ve got dry shade, Oakleaf Hydrangea is for you. Yes, you’ll need to water it for the first year during dry spells until it’s settled in, but that’s about it. Late spring clusters of white flowers eventually dry on the shrub, making lovely additions to dried flower arrangements. Leaves are bright green in summer and turn scarlet in autumn, remaining on the stems well into late fall. Winter bark is a deep rich brown that contrasts beautifully with snow.  In neighborhoods plagued by deer, the leaves of these shrubs will be eaten. In my yard, I find that if I spray the leaves with one of the repellant mixtures you can buy at any landscape supply store, the deer don’t touch them. In my yard, if I spray in early spring when the leaves are just emerging and again in autumn, I deter most of the nibbling. These are the times when the deer are hungriest in my area. The spray I apply smells horrible (garlic and pepper, I think), but when it dries, I can’t smell it — but the deer still can.

That photo was taken in late winter. The bright red berries of our native deciduous hollies are the food of last resort with my local birds. Eventually, usually at the tail end of a cold winter, a flock of Cedar Waxwings will descend on these shrubs that I’ve added to my floodplain and strip them clean. I love these shrubs because the persistent crimson berries really pop in a winter landscape, especially because the branches drop their leaves well before that season. Ilex decidua and I. verticillata have been favorites of horticulturalists for a while. Many spectacular cultivars are available reaching various sizes. They’re native to floodplains, but happily tolerate higher ground in a well-prepared bed.

Note that all hollies are dioecious, meaning male and female flowers develop on separate plants. Females produce the lovely berries, as long as a male of the same species is close by. I usually group two or three females where I want them to be seen, and then tuck in a male plant nearby but more in the background — close enough to provide cross pollination, but far enough away to prevent its lack of berries from detracting from the visual impact of these shrubs in the winter landscape.

This post is growing lengthy, so I’m going to close with a few more suggestions and links to where I’ve described these shrubs before.

October fast approaches. Now is the optimal time to plant native trees and shrubs. Almost every local nursery has a sale this time of year, and so do most public gardens, including the North Carolina Botanical Garden in Chapel Hill, NC. Members-only night is this Friday. If you live in this area, I hope I’ll see you there!