Yes, that’s right, folks. Wonder Spouse celebrates another trip around the sun today, and like fine wine, he just keeps improving with age. I took this shot of the Ace-Photographer-in-Action last weekend, when he shot all those pictures I told you about in my previous post. You’ll see more of those as he finishes post-processing them.

Wonder Spouse believes his birthday should be ignored, but I could not be prouder of my spouse and his achievements, so today, I want to share just a few more of his amazing photographs. These were taken over the course of the last 4 years, and I think you’ll agree they are spectacular.

Lest you think Wonder Spouse only shoots botanical subjects, I thought I’d include a couple of his photos from our trips to the NC Zoological Park in Asheboro, NC. We try to get there at least once a year, usually in the late fall when there are fewer visitors, but the animals are still active. This shot speaks for itself, I think. 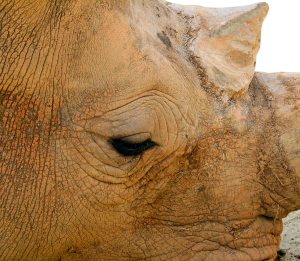 A close-up any rhino would love.

I love this one. It proves that wrinkles can be beautiful! 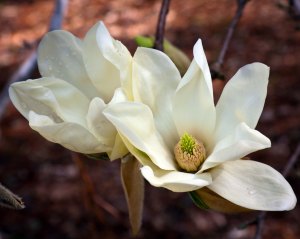 Long-time readers may remember this photo. Our now 50-foot-tall Magnolia ‘Elizabeth’ glows magnificently in our landscape when she’s in full bloom. But you really need to view her flowers closely to fully appreciate this tree. 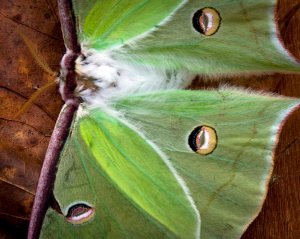 I love the details visible in this close-up of a Luna Moth — the feathery antennae, the almost fur-like look of the wing scales — exquisite, yes? 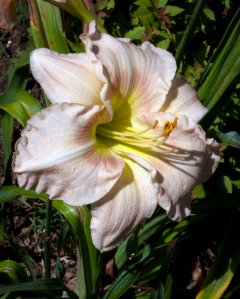 This Wonder Spouse photo really highlights the subtle beauty of this daylily. If you click on it to enlarge it, you’ll see the petals almost shimmer. Daylily blooms only last one day. I’m so glad Wonder Spouse preserved this blossom for eternity.

This photo really shows off Wonder Spouse’s artistry. He wanted to play with light, so he brought a bloom into the house and experimented with lighting until he got the effect he wanted. I think he got it right. What do you think?

I think this shot really shows off the beauty of our native Common Buckeye Butterfly. Although, I don’t think its looks are “common” at all. Wonder Spouse makes it look easy to photograph butterflies and other creatures, but, trust me, those little critters never stay in one place for very long. It takes considerable skill to frame a shot like this one. Even plants are trickier than non-photographers might think. The slightest breeze can turn a perfect shot to blurred fuzz.

Our front garden in the winter of 2009

We haven’t had a photo-worthy snow in a few years now. I love the way a good snow obscures all the imperfections in a landscape while highlighting structural elements like trees and garden benches. The Birthday Boy’s skill in framing a landscape shot is fully evident here. I think you’ll agree with me that he is a true artist with the camera.

He has many other praise-worthy attributes as well, but he’s likely going to be unhappy with me as it is for making him the subject of a blog post.

Too bad, Wonder Spouse. Today is your day. It deserves to be celebrated. And I count my blessings daily that I get to share your journey with you.

Where’s a firecracker when you need one?

Are you kidding me?!

No, your eyes are not deceiving you. That’s a groundhog, woodchuck, varmint — whatever you want to call it. And it’s basking in this afternoon’s sunlight on my front garden bench! We’ve had over a week of rain. I’ll share the flood pictures and stories soon. Every critter in the area is soggy. When the sun finally showed up today, this critter decided to make the most of it. Apologies for the fuzzy photo. This was taken through my front kitchen window, which has a screen. I couldn’t believe my eyes when I saw this critter so at ease in my front garden.

And then it got worse: 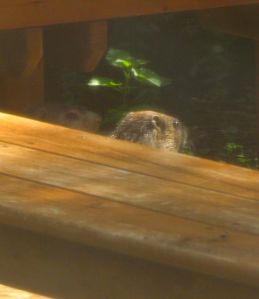 Again, it’s not a great shot, but if you look carefully, you’ll see TWO groundhogs. Apparently, they have moved in beneath the front walk, the walk that Wonder Spouse and I traverse many times daily. I have never missed my dear departed dogs any more than I did when I saw these critters settled so comfortably so close to my house.

But enough complaining on this FINALLY sunny Fourth of July. I had merely intended to share a spectacular photo of our daylily ‘Siloam Dan Tau’ that Wonder Spouse took this morning, and wish my fellow Americans a Happy Independence Day. So that is what I’ll do now: 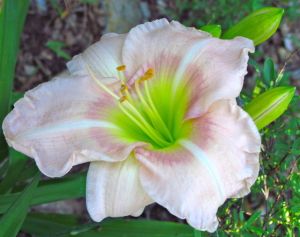 And after the succession of daylily flowers has progressed from early birds like ‘Happy Returns’ to show-offs like ‘Siloam Dan Tau.’

We’ve usually been eating summer squash for several weeks, along with the first few celebrated tomatoes.

That’s when I see them: Eastern Box Turtles in the middle of roads — little country roads and even four-laned roads. Hormonal urges to mate make them recklessly trudge into traffic.

Turtle Weather is really reptile weather. When I see the intrepid Eastern Box Turtles lumbering in search of love, I also begin to see Black Rat Snakes everywhere. I often see them flattened on roads; too many ignorant drivers go out of their way to kill snakes.

But I saw a healthy live one yesterday. It wiggled out onto the road just as I approached in my car. I slowed, and it wisely chose to reverse course, returning to the safety of vegetation growing along the shoulder.

Most startling this week, I came face-to-face with a smaller Black Rat Snake (maybe 2 feet long) at my front door. It was hunting mice that lurk around the built-in bench by the entry just as I opened that door. After two or three seconds of eyeball-to-eyeball frozen staring, we both fled in opposite directions.

Turtle Weather usually lasts a few weeks past the Summer Solstice, which this year arrives next Wednesday. After that, summer heat usually bakes the ground so hot that reptiles only emerge at dusk and dawn, when I usually remain indoors due to the voracious hordes of mosquitoes that own the air during those times.

When Turtle Weather arrives, I know I’ll be spending daily hours in the vegetable garden harvesting the fruits of my labor. Today, I harvested the first beans — enough for a celebratory feast tonight. 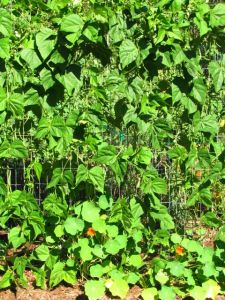 These Fortex Pole Beans will be big enough for harvest in a day or two.

The Jade Bush Beans will also be contributing to this evening’s first-harvest bean feast. Here’s the modest row of Jades:

Only the large plant in the foreground had produced harvestable-sized beans, but the others are full of smaller fruits.

Turtle Weather means the wild blackberry thickets will soon be filled with raucous birds feeding on ripened fruits. Cicada thrumming should start up any minute. Weekends are filled with the scents of freshly mown lawns and meat grilling in backyards.

Turtle Weather takes me back to childhood treks through Piedmont woods, neighborhood kickball games on the dead-end street in front of my house, blackberry-picking expeditions from which I returned so covered in red juice and bloody thorn scratches that one could not be distinguished from the other until after a good washing.

Turtle Weather is finite and therefore precious. Reptiles know they must brave busy roads before the time is past. Children know they must play until full dark descends, so as not to waste a single night of no-school-tomorrow freedom. Gardeners know harvests don’t last forever. Fresh fruits must be celebrated, savored, and the excess stored for dark winter feasts.

Turtle Weather is the best Summer brings us. I encourage you to grab it while you can. 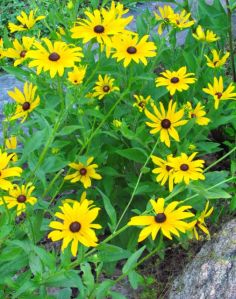