Posted by piedmontgardener in Favorite Plants, piedmont gardening on April 15, 2011 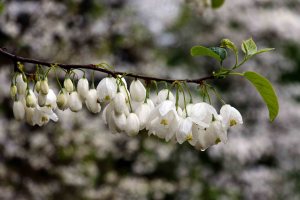 Don’t get me wrong, I’m a big fan of Flowering Dogwood, as I described here. However, I’ve added another native white-flowered understory tree to my yard that peaks about a week after the dogwoods: Two-winged Silverbell (Halesia diptera).  I have two specimens. The older one is about twenty feet tall and fifteen feet wide. When it blooms, every branch is covered in pendulous white bell-shaped flowers that dance daintily in spring breezes.

Unlike its cousin, Carolina Silverbell (Halesia tetraptera — formerly H. carolina), the flowers of Two-winged Silverbell are more dissected, so that the petals flare out a bit as they dangle. It’s a very pretty effect. I love to stand beneath the tree’s blooming branches and look up into the dancing bells. I always expect them to tinkle melodically, but so far at least, they’ve remained silent.

Piedmont purists will note that Carolina Silverbell is the Halesia native to our understory. Two-winged Silverbell occurs naturally on the coastal plains of southern states like Georgia and Alabama. Carolina Silverbell can also grow taller — typically up to 40 feet, but sometimes as tall as 80 feet.

Two-winged Silverbell, on the other hand, remains more petite, not usually exceeding 30 feet. Halesia diptera is found naturally in swampy spots. But my trees are flourishing at the top of my hill, which is not particularly moist. I suspect mine are happy because they grow adjacent to mature Loblolly Pines that protect them completely from hot afternoon sun. Because they can keep their cool, they are happy — at least that’s my theory.

But if you’re a garden gambler, and you’ve got a shady spot with well-drained soil, consider Two-winged Silverbell. When its snowy bells are in full bloom, this tree makes dogwoods look almost dowdy.