A Week Beside Our Wetland

Posted by piedmontgardener in Native Wildlife on May 19, 2020

When Wonder Spouse and I moved to these five acres just over 31 years ago, about 1.5 acres were a floodplain. The area was dominated by a mature canopy of green ash trees; grasses and wildflowers grew beneath the trees. The creek that bordered our property was healthy, deeply incised, clear-flowing, full of crayfish, freshwater mussels, and fish. Intervals of years would pass without the creek overflowing onto the floodplain, which we mowed a few times during the growing season to minimize our chances of stepping on a snake. We planted native understory shrubs that should have been there: Spicebush, deciduous hollies, Virginia Sweetspire, Bladdernut, Beautyberry, Viburnum, and more. Growing in their ideal habitats, all flourished beneath the 70-foot ash forest.

A yearling saunters by at sunset.

Then the bulldozers came. Lots of bulldozers. The healthy second-growth forests that had surrounded us disappeared tract by tract as long-time landowners sold their family heritage to men eager to strip the land bare, replacing trees with subdivisions indistinguishable from each other. Silt deposits filled the creek — the consequences of sloppy construction techniques. Forests disappeared. Native wildlife that once had hundreds of acres to roam were squeezed into smaller and smaller patches of forest. One of the largest of those patches — probably the largest — is our land and the forest on the other side of the creek that, we hope, is too much of a wetland to attract the interest of the bulldozer clan.

Beavers that had lived a few miles from us along quieter streams were displaced by houses surrounded by fescue lawn deserts. They found refuge downstream from our land. A dam system longer than a football field has captured enough water to make a sizable, mostly shallow pond where Black Willows, sedges, and cattails dominate. The wetland raised the water level beneath our floodplain; its transformation to wetland is well underway. The ash trees doomed to death by the arrival of non-native, invasive Emerald Ash Borers will be replaced by rapidly expanding stands of Black Willow. Some of the shrubs we planted are hanging on; some couldn’t handle the rising water. Significant floods now happen somewhere between six and twelve times a year, depending on the hurricane season and cut-off low pressure systems like the one about to dump four or more inches of rain on us over the next two days. 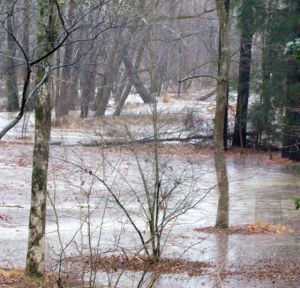 The floodplain is no longer flat. Multiple channels of flowing creek water now cover it. You must wear boots to wade across them if you want to walk to the end of the property. Massive silt deposits line the edges of the channels, sediment dropped by flood waters that lose speed as they leave the original creek channel. Topography and vegetation are nearly unrecognizable when compared to where we started three decades ago.

The dynamic nature of this area has been my great teacher. I have learned humility — no longer do I think I am the decider of what plant grows where. Nor do I know from one day to the next what plant or animal I might meet in this ever-growing wetland. The area definitely keeps me on my toes — safely dry within my muck boots, of course.

My strategy now is to plant as many well-adapted native plants as I can afford into this wetland area to increase species diversity and, I hope, to provide food and shelter for the ever-growing wildlife population sharing our land with us. We think our attempts are proving successful, if what we see captured on our wildlife cameras is any indication.

We have two wildlife cameras strategically placed on our floodplain near the creek along an obvious wildlife path. The less expensive one we got first contains one camera that tries to take both day and night shots. Image quality is sub-optimal, which is why we invested in a more expensive model with two cameras — one for day shots, the other for nighttime photo captures. We download both cameras once a week to see what animals wandered by. Species numbers and diversity vary widely from week to week and month to month. Last week’s download produced a nice array of species, and included an action sequence of a fight between species. Another sequence prompted me to learn a new term — gang brood. Photos and explanations follow.

As you might guess, deer are frequently caught by the cameras, but they are definitely more active during some parts of the year. Bucks, for example, had not been seen much until this past week. My theory is they don’t like to show themselves until their new antlers make an appearance. Several showed up this week sporting velvet-covered antler nubs: 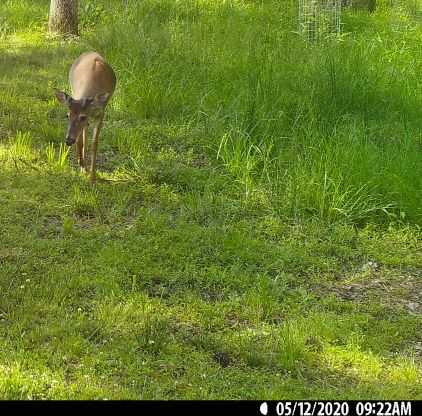 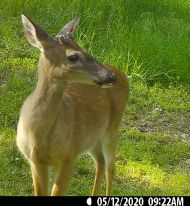 This buck is younger and smaller with only single-point antlers visible.

This time of year, the males seem to hang out in same-sex groups. These two are listening to activity up the hill — probably me working in a garden area.

The does are extremely pregnant. We haven’t seen them on the cameras or in our yard much lately. We assume they are laying low while gestating. One of the does caught on the camera is very, very pregnant. I suspect she will — or may have by now — produced twin fawns. 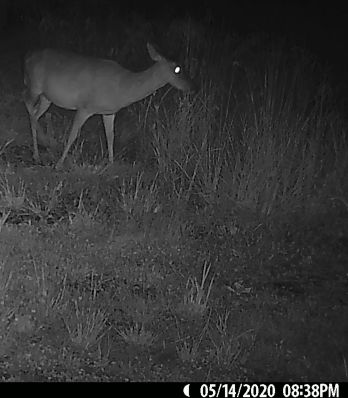 The pregnant does only showed up in nighttime shots this week.

The camera never caught all of her, but I think that belly is carrying twins.

And now for the fight. This is a first for our wildlife cameras — a tangle between a possum and a raccoon. These are nighttime shots and the animals were moving so there is motion-blur. The whole sequence occurred within one minute. We think perhaps the raccoon thought it might try possum for dinner, but the possum declined.

That’s the possum snarling in the upper left side of the photo. 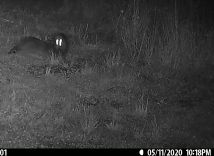 It’s blurry, but you can see the raccoon’s tail on the left side. The possum’s eyes are glowing.

It appears the raccoon decided the possum wasn’t worth the effort required. 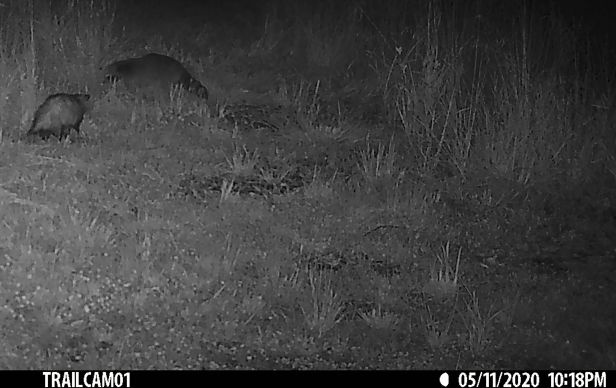 Before it exits into the high grass, the raccoon gives the possum a final glare.

After the raccoon left, the possum lingered long enough to be sure the raccoon wasn’t returning, then disappeared into the tall grass — taking the opposite direction from that chosen by the raccoon:

Heading off in the other direction.

Disappearing quickly into the tall grass on the upper right.

The raccoon shows up in photos later in the week, but the possum does not. We suspect the possum simply decided to avoid the area.

The cameras caught four different bird species during daylight hours this week. The older camera caught a fuzzy shot of a black vulture. A group of them likes to hang around the creek and bathe in a shallow area. It’s not unusual to see crows caught occasionally by the cameras. They seem to be everywhere, perpetually curious. The camera catches shots of Red-shouldered Hawks fairly often. Wetlands are their habitat. This one was doing what we often see them doing — grabbing juicy earthworms from the fertile, wet floodplain soil. 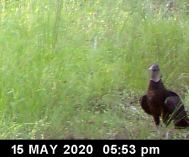 We’re hearing fish crows often, but we also still hear American crows, so this one could be either species.

During its first visit to this spot on May 14, we didn’t see the Red-shouldered Hawk with food.

A couple of hours later the same day, you can just make out the worm in the hawk’s beak.

Another bird species concludes this edition of Wetland Wildlife. Canada geese have been loudly present on the beaver pond since late winter. In past years, the pond was the nesting site of one pair of geese. As their goslings matured, the family would swim up the creek to an area near our backyard, then wander up the hill toward the greenhouse, nibbling vegetation as they strolled. We’ve been waiting for the cameras to capture this behavior, but were very surprised when last week’s footage revealed three adult Canada geese and goslings of two distinct ages, all hanging around together. That’s when I went online and learned about gang broods. Read about this behavior here in the section on behavior. It appears that some Canada geese parents band together with other parents and goslings, likely as a form of mutual protection from predators. This is just another example of what the growing wetland on our property is teaching us about the natural world.

In the Canada geese sequence that follows, you can see watchful parents scoping out the area before goslings appear. The final photo in this sequence was the last one of these birds on the camera. I am guessing that parents lost patience with offspring and rushed them off before the camera had another chance at a shot.

The first goslings come into view.

Now we can see the goslings are not all the same age.

The elders have decided it’s time to return to the creek.

The goslings appear to need encouragement to leave.

I predict that in the next few weeks the cameras will be capturing many photos of does with fawns frolicking around them. It also should soon be time for the wild turkeys to make an appearance. We’ve spotted the toms in an adjacent field by themselves. We know they separate from nesting hens to draw off predators. Last year after the chicks had grown a bit, a group of about a dozen hens, chicks, and toms were caught by the cameras on numerous occasions. Here’s hoping we get a repeat. Stay tuned…