I know I’m not the only person out there who had a rough summer. Trials and hiccups aplenty came at me for many months. I could not wait for the autumnal equinox in September, thinking the season change would bring relief. Instead, it brought the worst drought experienced by my five acres in twenty or so years. Unrelenting heat and the absence of rain left the creek bordering our property completely dry, except for deeper pools, where great blue herons happily devoured fish trapped therein.

The contrast between this September and last year’s relentless hurricane rain flooding could not have been more stark. Climate change smacked me and my land hard two years running.

In June, the antique septic field associated with our 50-year-old house was replaced with a new one. The devastation to my deer-fence-enclosed north acre full of native rhododendrons, magnolias, viburnums, vacciniums, and shade-loving choice wildflowers threw me into a tailspin of depression. Wonder Spouse and I planted these beauties as tiny things – all we could afford – 20-30 years ago. As previous posts here can attest, they have flourished, blooming more wonderfully every year.

Even though we marked off our botanical treasures with flagging tape, even though Wonder Spouse took off two days of work to oversee the trenching, that once-beautiful area was significantly damaged after he returned to his office and I was away at an appointment. On top of that, we were forced to remove a mature water oak before the work began, because it had early signs of heart rot. We couldn’t risk having the tree topple and rip up the newly installed septic field.

That enclosed acre is on a slope, which is great for siting rhododendrons, but when earth is scraped, then compacted, erosion from rare-but-heavy rains quickly created myriad little gullies. Soil washed from hilltop to hill bottom, depositing more than an inch of silty mud. I am not ashamed to admit that I cried for two weeks, mourning the loss of trees and shrubs ripped away by machines, the much-missed shade of the venerable water oak, and the wildflowers obliterated by careless men oblivious to the vibrant beauty before them. 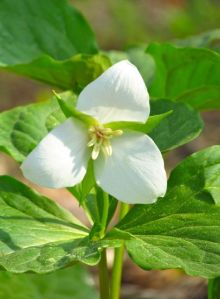 One of the wildflower species destroyed by septic field installers. They were not growing where a line was installed.

Eradication of Surrounding Forest by Bulldozers

Most of the areas near us that were forest thirty years ago have either already been erased and replaced with monotonous subdivisions, or that devastation is ongoing as I type. Every day, more displaced wildlife from those areas arrives on our land, as evidenced by what our wildlife camera beside the creek captures weekly. A considerable beaver population has been forced on top of the wetland adjacent to our property. Up to now, they had been content to maintain their growing pond on our neighbor’s land, but yet another new subdivision (housing prices starting in the mid-$600s!) has pushed them to expand their dam so that our bottomland is rapidly going under water.

That was the third strike against our floodplain this year. The first came in April when deadly Emerald Ash Borers were confirmed to be invading the 37 mature (70+ feet tall) green ash trees that dominate the canopy in that area. The second came in late summer when a plant I had never seen before that had spread over most of the floodplain finally bloomed and I was able to identify it as a non-native invasive plant from Asia that, I’m told, has already overgrown all the floodplains of the NC coast and is now moving rapidly into my Piedmont region. It is called Marsh Dayflower (Murdannia keisak), and it is a nightmare. I never thought I’d type this sentence, but Marsh Dayflower dominance makes me long for the days when Japanese stiltgrass (Microstegium vimineum) was my biggest problem. Strike three – the beavers – are actually using Marsh Dayflower to their advantage. They rip it up, mix it with mud, and pack it between the logs they cut down to build their dams, making the dams even more impervious to the force of moving water than before. This is a mutually beneficial relationship, because when stem segments of Marsh Dayflower are broken, as for example, when ripped up by beavers, every segment grows roots, thereby multiplying this invader even faster.

After two years of epic landscape destruction/alteration, any illusions I ever had about being able to control what happens on my land are entirely dispelled. I always understood that, at best, I was a design collaborator as I tried to work with the native ecosystems on our land. However, the last two years have convinced me that the native ecosystems are almost as ineffectual as I am at managing changes we were never designed to handle. Wholesale eradication of habitats by bulldozers in combination with a growing number of non-native invasive species of animals, plants, fungi, and bacteria and the overwhelming introduction of herbicides and pesticides killing wildlife by the millions if not billions, are completely disrupting the natural processes native ecosystems evolved to handle change. We can’t keep up. Species are dying at record rates. It is enough to make a lifelong gardener want to surrender – almost.

This native tree frog was in my garden because it found abundant insect food there.

A month or so ago, I attended a lecture by a pair of enthusiastic master gardeners from an adjacent county. They described how they transformed their half-acre home lot into a flowering paradise, bragging that 50% of the plants they have added are native to the southeastern US. To justify planting 50% non-native plants, they quoted an “expert” gardener who states that “just because a plant is native, that does not make it better… Choose the right plant for the spot, no matter its origin.” In an exercise of enormous self-control, I did not argue with them. It was their talk, their intentions were good, and it was not the appropriate setting to object.

But I do object, and the last two years on my land are ample reason why. In North Carolina, master gardeners are trained by employees of land grant universities, mostly North Carolina State University. These are good folks with good intentions, but they serve the agriculture and horticulture businesses in the state. Their top goal is to help these businesses be successful. One way to do that is to help the horticulture industry sell plants. Pretty non-native ornamental plants not eaten by native wildlife because they don’t recognize them as food make a lot of money for the horticulture industry.

[NOTE: One of the finest agricultural extension agents I know has pointed out to me that when they work with home gardeners, their goal is only to make those home owners successful gardeners, not help the horticulture business sell plants, regardless of origin. I did not mean to imply otherwise; I think that may, however, often be an unintended consequence of not providing an ecological framework for gardeners. As I responded to her, when agents keep pushing old thinking (right plant for right place regardless of origin) about how to approach home landscapes, they are not helping to save native ecosystems. In my conversations with agents and master gardeners from other counties, it is clear that most don’t understand the role of native plants in ecosystems. They categorize natives as “thugs,” for example, if they multiply assertively, without understanding the ecological role of such plants in nature. In my opinion, such non-contextualized statements do more harm than good. ]

Fifty years ago, this may not have been a terrible thing. But oh how much our world has changed here in North Carolina in the last 50 years. Expanses of forests and fields that once provided buffers and havens for native wildlife and plants are nearly gone in much of the state. Wildlife species are disappearing. Pollinators are dying from poisons; the birds that eat them are also disappearing. Humans need those ecosystems to moderate air pollution, control erosion, pollinate and protect our crops, etc.

We also have hard data from scientists now that demonstrate that landscapes must contain 70% native plant species to adequately feed nests of baby songbirds. That’s seventy percent, not fifty.

This is not a Drill!

We need every patch of native plants we can introduce on public and private lands not covered by concrete and buildings. We no longer can afford the luxury of filling our landscapes with non-native plants that provide no ecosystem services. We can no longer indulge in 50-year-old thinking. This is not a drill, people. Native plants are our only hope of saving what’s left of our native ecosystems, especially the rapidly disappearing wildlife species.

Only a radical shift in the way we think about our public and private landscapes will serve the future now. It is past time to discard old thinking and focus on saving as much as we can. I pray every day it is not already too late. And I’m not just sitting at my computer wringing my hands in frustration. After my initial depression dissipated, I got busy. With the help of Wonder Spouse and my amazing garden helper, Beth, we have planted many new species and introduced existing natives to new sites opened up by the uninvited changes to our land. Our land had a tough summer and a hard fall, but I’m determined to do everything within my power to make next spring a much better season. I’ll describe some of what we’ve been doing in another post I hope to write soon.

In the meantime, if you care about the future of our planet, especially the rapidly urbanizing area of the southeastern US where I and most of my readers live, if you have children and/or grandchildren, I beg you to empty your brain of the old ways of tending your landscape and join me in the radical changes required to salvage as much as we can of our native ecosystems. It will be different, but more beautiful than ever. Most important, it just might help us all hold on to a healthy, balanced, vibrant world – a fitting legacy for those who follow us.

Native plant gardens full of life are critical to the welfare of future generations.