The piedmont garden –a many-layered splendor

Posted by piedmontgardener in piedmont gardening on January 18, 2011

My patch of piedmont

As a life-long gardener, I am fond of many plants. I have a bias toward the natives of my North Carolina piedmont, probably because I grew up in piedmont forests. Oaks and hickories, loblollys and sycamores — these are the lasting friends of a childhood spent climbing trees, wading creeks, and digging toes in cool moss on torrid summer afternoons.

When spouse and I bought our five acres over two decades ago, we chose the land because of its rich array of microenvironments, its mature deciduous trees, and the wetland and creek that bordered our property. In spring, the frog chorus is deafening, nearly overpowering the sweet refrain of the love-sick whip-poor-whills. Winter moonlit nights echo with the manic calls of barred owls. Summers thrum with the voices of myriad cycadas. It is a rich, vital piece of land.

But that’s not to say we haven’t added our own touches. The previous owner of our property landscaped it like a park. He left the large deciduous trees — oaks, river birches (enormous ones), tulip poplars, hickories, sweet gums, sycamores, pines, ashes, and maples — but cut out all the smaller understory trees, except the native dogwoods.

Structure of a healthy piedmont forest

Although I can sort of understand the aesthetic appeal of such a landscape, it is sterile and unnatural for my region. Healthy piedmont forests are layered. At the top are the giant canopy trees. Beneath is the understory layer of smaller trees and larger shrubs. The next layer down is the shrub layer, and finally, flourishing at the bottom in the rich humus made of fallen leaves is the herb layer, where all the woodland wildflowers dear to my childhood abound.

I’ve been planting mostly understory species for the last two decades, trying to rebuild my forest layers, so that I can create a habitat favorable for woodland wildflowers. I am happy to report that we have made definitive progress toward that goal.

One big plus of this work has been the response of the local bird population. Now the land is filled with habitats suitable for just about every bird species native to the region. And as the forests near us have been felled to make room for suburbs, more and more feathered refugees are seeking asylum among the added viburnums, vacciniums, rhododendrons, magnolias, spice bushes, Virginia sweetspires, hydrangeas, wax myrtles, and the list goes on.

The process of restoring our land’s optimum vegetation layers has not been without challenges. I had never encountered serious deer predation until we moved to our current home.  New trees and shrubs had to be surrounded by tall wire cages for the first five to ten years of their lives. This usually is enough time for them to grow large enough to withstand some browsing by the antlered hogs of the forest.

Because of the creek adjacent to our property, we experience periodic invasions by beavers. They once flooded the back acre of the floodplain. The trees there were in danger of drowning, and any woodies within 100 or so feet of the creek were felled by these industrious rodents. We tried to live with them, but the wildlife officer I talked to explained that beavers strive to create a ten-acre lake. If we had had a hundred acres, I would have given them ten. But we didn’t, and so the beavers were eradicated. But before they left, they cut down and devoured several choice trees we had planted along the bank of the creek. Now any trees located in that region are surrounded at their bases with hardware cloth to a height of three feet. They now flourish despite occasional beaver returns.

Coping with a limited budget

Of course, cost is a primary consideration when acquiring new plants. I buy very young, small trees. Most are bare-rooted from a nursery in South Carolina that specializes in native plants. Starting so small means it takes about ten years for most new arrivals to begin to make an impact in their new homes. But now that 20+ years has passed, some of the earliest planted newbies are really beginning to shine.

Two years ago, I became frustrated by the deer predation on my north slope plantings. In this area, I’ve planted every deciduous native magnolia species plus almost every native deciduous azalea species — plus a few hybrids and named cultivars of these species that I couldn’t resist. But the plants weren’t growing very quickly, and any growth that protruded outside their wire cages was grazed by the voracious deer. Spouse agreed that we would try enclosing this approximately three-quarter-acre area with deer fencing. The response of the plants astonished me. As I removed them from their wire cages, you could practically hear them breathing sighs of relief. In one growing season, they doubled or tripled in size — all of them!

The other big win with the deer fence is that its presence changed the foraging patterns of the local deer. Instead of waltzing by my front beds every day (eating my coneflowers, daylilies, etc.,), they now take a route much further out, because the fence cut off their usual path to the creek. Deer predation of unprotected areas was nonexistent until late summer last year, when the drought drove them toward any plant still green.

In case any gardeners of more modestly sized spaces are reading this, let me assure you that you can accomplish much of what I’ve done on your smaller scale. It won’t cost you as much as I’ve spent in time, money, or frustration, and you’ll be amazed by the birds that move in to share your space.  I’ll write more about this another time.  But know that if two middle-aged, part-time plant nuts with only occasional help from others can transform five acres in 20+ years, homeowners of typical suburban lots can transform their yards into piedmont paradises much more quickly.

You decide: Is the native piedmont forest worth preserving?

As deforestation continues to accelerate in the southeastern piedmont, I believe the only hope for our native wildlife — and our native plants — is to welcome them into our backyards. You must decide if the call of the wood thrush on a summer evening should be a part of your child’s memory. You must decide if your child benefits by knowing the difference between a red maple and a sweet gum, or that sourwood leaves really taste sour. I decided long ago, and so I plant, and protect, and dream. 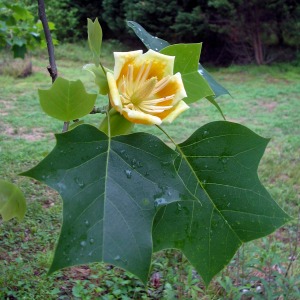