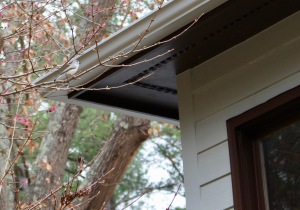 Mr. Titmouse glaring at his enemy

We all know what an extraordinary February it’s been. The April-like temperatures have caused countless trees, shrubs, and perennials to begin blooming at least a month ahead of their normal schedules. The weather has also affected the birds, including this feisty Tufted Titmouse, who has been battling his reflection in our garage window for a week now. He was at it still this morning before the rain began.

We’ve had this problem before, but not with this species. The last time was 2011, when an Eastern Bluebird spent several weeks battling his image in this very same window. This window is quite high up; there is no easy way to cover it to reduce its reflectivity. The birds don’t seem to injure themselves, but I worry at the enormous waste of energy they expend doing battle with themselves to win the admiration of the attentive females that sit in the flowering apricot and watch the show. For hours. And days. And weeks.

I can hear Mr. Titmouse uttering his challenges as soon as I step out my door. It’s a very melodic whistling — not the least bit ferocious to my ear. I wonder if at that point he is calling to his prospective mate — a “Check me out, baby” come-on to draw her closer for the show.

I was unable to manage a photo of Mrs. Titmouse; she is quite shy, and as soon as her hero flies away from the window, so does she. So if I wanted a shot of him, I missed her. But trust me, she is always nearby taking in the machismo displays of the Toughest Titmouse in Town.

The battle is always the same. First, Mr. Titmouse sounds the challenge to his magnificent reflection as he sits on a branch. When he is sure his prospective mate is watching, he takes to the air and throws himself against the window, wings beating in a blurred frenzy. 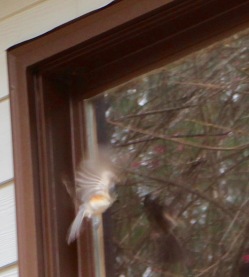 His ferocity is impressive. 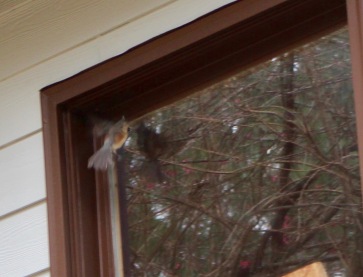 Note the reflection as he flutters. 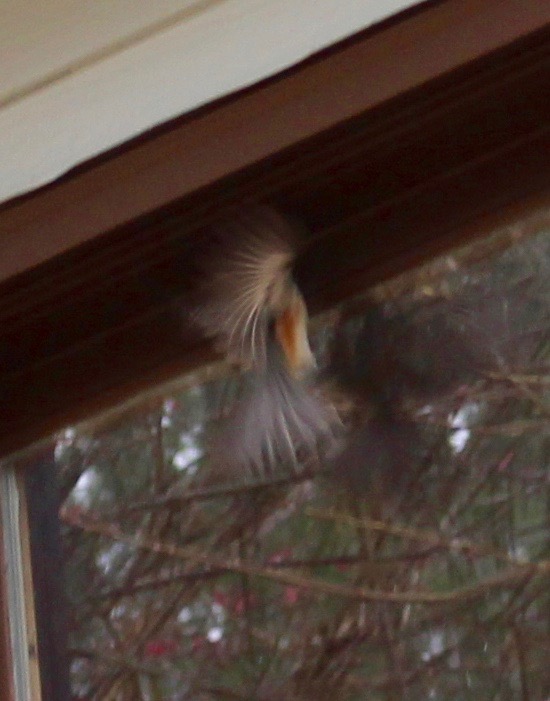 After each round, he rests briefly on the window sill and assesses the interest of his lady love. 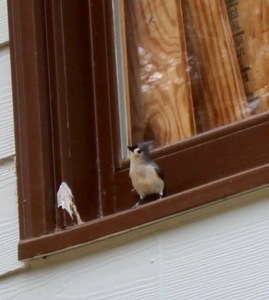 He tilts his head and sings to his lady.

Then it’s time for a brief rest between rounds, so he flies back to the nearby branch to collect himself before his next heroic display. 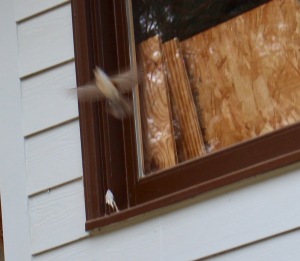 A motion-blurred flight back to recuperate for the next battle. And yes, the white blotch in the corner is exactly what you think it is.

In 2011, Mr. Bluebird did this for over a month. I think Mr. Titmouse will likely continue his battles until the angle of the light changes about the time of the vernal equinox. Every time I walk behind the garage — which is often — I implore Mr. Titmouse to behave more sensibly. He flies away briefly, but as soon as I’ve moved a few steps away, he returns to the battle. Whether it’s birds or humans, I’m afraid it is true that hormones and sense do not mix. The battle rages on…

This entry was posted on February 28, 2018, 4:50 pm and is filed under Native Wildlife, piedmont gardening. You can follow any responses to this entry through RSS 2.0. You can skip to the end and leave a response. Pinging is currently not allowed.