Sunrise on the floodplain the day before frozen precipitation arrived.

You’ve probably been hearing about the Big Snow that came to the East Coast of the US over the last few days. My corner of piedmont, North Carolina only caught the merest edge of it. But when you catch the edge of such a storm, you often don’t get all snow, and that’s what happened to my area. My yard got two inches of sleet on January 22, followed by about a half inch of snow on January 23. Areas no more than 25 or 30 miles from me got freezing rain — lots of it. Some of those poor folks still don’t have their power back on yet. I know how miserable they are. It’s happened to us during previous ice events.

Northern Cardinals and friends huddled in the winter hazel near the feeders as sleet fell.

Wonder Spouse and I were well prepared. The generator was hauled out and tested, extra food and water was acquired, cell phones were charged. And I put out extra suet and seed for the birds.

The sleet started early on the morning of January 22. I took occasional shots of wildlife activity through the windows of my warm living room while Wonder Spouse conducted business as usual from his home office.

About mid afternoon, a doe and her yearling stopped by the feeders to see what the birds might have knocked to the ground. They didn’t find much; hordes of white-throated sparrows had been cleaning up seed spills all day.

The doe did most of the scrounging while the yearling watched.

They soon jumped the fence and wandered back to the floodplain, heading for the swampy area where Atamasco lilies and Jack-in-the-Pulpits dreamed about next spring’s flowers.

Northern Cardinals remained at the feeders long after the deer left. And the sleet continued to fall.

On the morning of the 23rd, we woke to a warm house — a great relief, because the weather forecasters had promised we would get a coating of freezing rain before dawn. But they were wrong. When the sky brightened, we saw wind-whipped snow falling — sometimes heavily, often merely flurries.  After breakfast, Wonder Spouse refilled the bird feeders after we discovered that my boots were unable to grip the slick sleet-covered ground well enough to prevent falling. 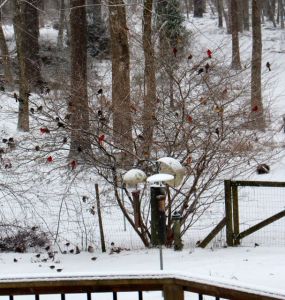 January 23 snowfall brought even more birds to the feeders.

I took all the photos during the two-day ice-fest from inside my living room, so they’re a bit less sharp than normal, but I think they convey a sense of what we were seeing. 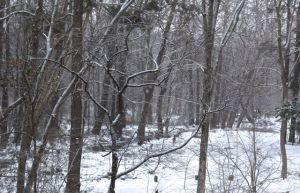 January 23 snow flurries on our floodplain. The creek is on the left side of the photo.

Today we woke to cloudless blue skies, abundant sunshine, and light breezes. Sun reflecting on snow-covered sleet was blinding, but its potent warmth was most welcome. Soon the gutters began to gurgle as melting snow trickled off the roof. Wonder Spouse and I spent most of the day shoveling heavy sleet off of decks and walkways. We were nearly done when we heard a loud thud. The solar panels on the roof heated up faster than the shingles, causing the sleet covering them to slide onto the deck below — the deck we had just finished cleaning.

All you can do is laugh.

The good news is the panels were able to start generating power again today.

Fortunately, we weren’t standing where the solar panel avalanche landed.

When we were reasonably sure the panels were done shedding ice, Wonder Spouse cleared the deck — again — while I tried to walk around the yard to take pictures. I managed to get a few, but the melting snow on top of the solid two inches of sleet was too slippery for me to negotiate any inclines, so my shots were limited.

I liked the way the ice melted first on the south-facing sides of the boulders. That’s Prunus mume ‘Peggy Clarke’ (junior) with the ice-killed pink flowers.

From the top of the hill on the north side of our yard, I managed to capture the dawn redwood highlighted by a sun already sinking toward the western horizon. 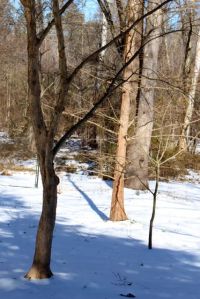 The trunk of the dawn redwood flutes out at the base similarly to the way bald cypresses expand at their bases.

All the plants that bloomed prematurely during our absurdly warm December have paid for their misplaced enthusiasm, as evidenced by the earliest flowers on my Magnolia stellata ‘Royal Star.’

Fortunately, not all the flower buds were precocious bloomers. And, yes, the sky really was this blue today.

I couldn’t get down to the floodplain without sliding down the hill, and I wasn’t sure I could get back up the hill if I did slide down. So I settled for this more distant shot.

The lone green-leaved plant in the middle is a Red Bay (Persea borbonia) that I added years ago. Technically, it’s native to the coastal plain, but it has been there now for at least 15 years.

The moon rose this evening still nearly full and very bright as temperatures plummeted on an ice-covered landscape. When it first topped the ridge to our east, it was edged by almost autumnal colors. I was too lazy to grab the tripod, so the shot is fuzzy. Thus, I end this icy tale with a bright blur, which somehow feels right after a day filled with shoveling, and a promise of sore muscles on the morrow.

A blurry ice moon to close out a wintry weekend.

This entry was posted on January 24, 2016, 9:12 pm and is filed under Favorite Plants, Native Wildlife, piedmont gardening. You can follow any responses to this entry through RSS 2.0. You can skip to the end and leave a response. Pinging is currently not allowed.