Ashes, ashes, all fall down

Top of a canopy Green Ash on my floodplain

This past weekend, I walked the floodplain portion of my yard to count the number of Green Ash (Fraxinus pennsylvanica) trees growing on it. Thirty-seven trees – 17 females, 20 males – most between 50 to 70 feet tall are the dominant canopy species in this part of our property, about an acre and a half. My adjacent neighbors’ properties also include floodplain areas that are dominated by Green Ash trees.

I was devastated when I realized how completely Green Ashes dominate the canopy layer of the healthy wetland that I live beside, because in less than ten years – more likely less than five, it is a near certainty that they will all be dead – felled by a tiny green insect from Asia that no one has been able to stop: the Emerald Ash Borer.

Trunk of a canopy Green Ash

The insect has already killed “tens of millions of ash trees in southeastern Michigan alone, with tens of millions more lost in Arkansas, Colorado, Connecticut, Georgia, Illinois, Indiana, Iowa, Kansas, Kentucky, Louisiana, Massachusetts, Maryland, Minnesota, Missouri, New Hampshire, New Jersey, New York, North Carolina. Ohio, Ontario, Pennsylvania, Tennessee, Quebec, Virginia, West Virginia, and Wisconsin”. Here’s a link to a current map of infected states that is maintained by the Emerald Ash Borer Clearinghouse (Click on the down arrow to move through time to 2015 and watch how many states become infected). The insect is expected to continue spreading until it has killed every ash tree species in North America.

In the southeastern piedmont region of the US where I live, four species of ash are native. Three are wetland species: Green Ash (Fraxinus pennsylvanica), Carolina Ash (F. caroliniana), and Pumpkin Ash (F. profunda). As is evident on my floodplain, these three are important species in wetlands, and when they are felled by the Emerald Ash Borer, the transformation such areas undergo will be profound. White Ash (F. americana) prefers deep, well-drained soils. Its wood has been used for centuries to make fine furniture, baseball bats, and any other wooden item that needs to be strong and lasting. It has been used extensively as a landscape tree.

Ashes have compound, opposite leaves, which help create shady moist woodlands beneath their canopies.

Animals that rely on ash trees

White ash is an important source of browse and cover for deer. Its seeds are consumed by wood ducks, northern bobwhites, purple finches, pine grosbeaks, fox squirrels, mice, and many other birds and small mammals. The bark of young trees is occasionally eaten by beavers, porcupines, and rabbits. Because of its tendency to form trunk cavities if its top is broken, mature white ashes are highly valued as nesting sites by cavity nesters such as red-headed and pileated woodpeckers, and then secondary nesters such as wood ducks, owls, nuthatches, and gray squirrels. 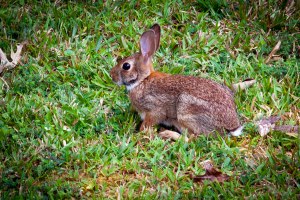 What will all these creatures do for food and shelter when every ash tree in North America is dead? No one can predict the future with certainty, but we can look at what has happened in southeastern Michigan, where this has already happened. Massive gaps in forest cover have favored the invasion of non-native invasive plant species. Japanese honeysuckle, for example, is starting to look like kudzu looks in the Southeast. Soil chemistries are changing, as are water cycling patterns, making it more difficult for remaining native species to maintain themselves. All the dead trees initially favored cavity-nesting birds. So the first few years after the ashes died, woodpeckers and other cavity nesters were more abundant. But the profound disruption in the ash-dominant ecosystems soon led to drastic reductions in the insect species the cavity nesters feed on. No insects means no birds. It’s Rachel Carson’s Silent Spring all over again – only this time the culprit is not DDT, but a non-native invasive insect that cannot be stopped.

What is being done?

Ash species in China – the home of the Emerald Ash Borer – appear to be resistant to this insect. Scientists are trying to figure out how to incorporate that genetic resistance into North American ash species. To that end, they are frantically saving as much ash seed as they can, in the hopes that, someday, they can re-introduce the species with genetic modifications that incorporate Asian resistance to Emerald Ash Borer.

Like charms on a bracelet, female ash trees (the species is dioecious) dangle seed clusters from slender branches.

That’s the dream. They aren’t there yet. And no one knows how long all the animals that need ash trees can survive without them. No one knows how ecosystems in which ash trees have been essential components for thousands upon thousands of years will handle such a massive disruption – the extinction of a key ecosystem component.

What can we do?

In the face of the inevitable destruction of all our ash trees, what should we do? Information is always our ally, so stay current on developments regarding the Emerald Ash Borer and any potentially resistant North American ash species. At the end of this post, you’ll find a list of links to get you started.

What am I doing?

As for my Green ash-dominated 1.5-acre floodplain, I’m going to start planting other tree species that I know are adapted to similar growing conditions, starting with the species that are already there, and adding more of some additional species that I have already added that appear to be doing well.

But note, this is a total Hail Mary on my part. The trees I’ll be adding will be young. I’ll be long gone before they can attain canopy height. Thirty-seven canopy-sized (50-70-feet tall) ash trees are way too many trees for me to remove as they die. This means dead ash trees will be dropping pieces of themselves all over the place, most likely including on top of other species growing beneath them. 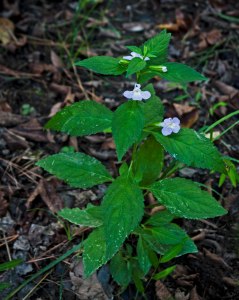 Right now, wildflowers like this Monkeyflower thrive beneath the canopy of Green Ashes on my floodplain. Will they remain when the ashes are gone?

Additionally, I can’t predict what changes in soil chemistry and water and nutrient cycling will occur. My new additions may not be able to handle these changes.

And the pressure from invasive exotic plant species is already enormous on my property. I spend more time and money on their removal than any other landscaping aspect by far. I may not have the resources to prevent invasive plant species from outcompeting remaining species and my new additions.

Will Japanese honeysuckle take over when the ashes are gone?

But the alternative is to do nothing, to throw up my hands and walk away, and I can’t do that. The green world is what keeps me going – physically, emotionally, and spiritually. I will fight for its survival until I can fight no longer.

You suburban and urban gardeners with no ash trees on your properties may think you’ve dodged a bullet this time, but in fact, you only perhaps have a bit more time to prepare for other battles before us. Already in areas where ash trees are gone, another tree in the same plant family is being attacked: White Fringtree (Chionanthus virginicus). 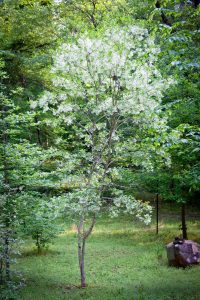 Will our spring-blooming native White Fringetrees be victims of the Emerald Ash Borer too?

A new gardening paradigm may be our best hope

Your best weapon will be vibrantly healthy home ecosystems. That is why my proposal for 21st-century gardens across the United States is so critical. Every patch of green will be essential to the survival of native animals and plants. Sterile, chemically controlled fescue lawns won’t help them. Healthy, vibrant, beautiful native landscapes might just save them.

The Emerald Ash Borer is now in the county adjacent to mine. It won’t be long before it finds my beautiful ash-shaded wetland. If you live in the southeastern piedmont in areas with ash trees, I encourage you to take your children, your grandchildren – or any child for that matter – to visit healthy ash trees now. Go appreciate the beauty of their dangling seeds, their compound opposite leaves, their gray furrowed trunks. Lock these images into your memories now, for soon they will be all you have left.

Appreciate the furrowed bark of ash trees while you can.

This entry was posted on August 3, 2015, 4:02 pm and is filed under Conservation Corner, Invasive Exotic Species, Native Wildlife, piedmont gardening. You can follow any responses to this entry through RSS 2.0. You can skip to the end and leave a response. Pinging is currently not allowed.