The Writing Spiders have grown large enough to make their presence known throughout the landscape. The yellow-and-black beauties that scrawl squiggles in their webs are probably about half grown now — big enough to spot, sited strategically among bean vines and trellised tomatoes. They know where the tasty bugs are to be found. I don’t argue with them, as long as they don’t cast their webs across the rows where I must walk. There’s nothing like a face full of spider silk to wake a sleepy gardener from her early morning harvesting tasks. 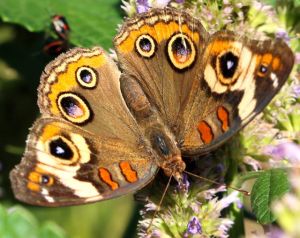 Butterflies continue to increase in numbers and species diversity — finally! The online butterfly group I follow seems to think they are the result of a second reproductive wave that has been vastly more successful than the first one. Whatever the reason, I am happy to see them animate my landscape as they float from zinnia to anise hyssop to abelia to coneflower. 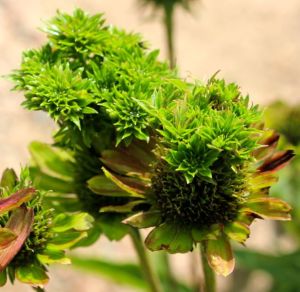 Recently, flowers of one Purple Coneflower and one Black-eyed Susan morphed into blooms that looked as if they belonged in a Dr. Seuss book. A quick search of the Web revealed they were afflicted with a disease called Aster Yellows. This disease is spread by leafhoppers; they inject the responsible organism when they feed on the plants. No cures are available. To avoid spreading the disease, the experts advise removal of the plants — and disposal in the trash, not the compost pile. 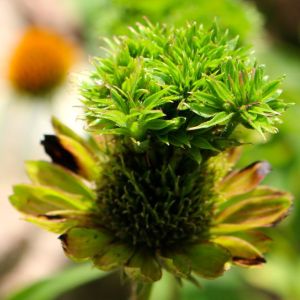 The disease can affect over 300 plant species, and grasses and weeds can act as reservoirs for the disease. Two of the most likely weed reservoirs are plantains and dandelions, both of which abound in my “lawn.” Symptoms of the disease vary with the infected species, but the Dr. Seuss-like flower tops are apparently key clues. The infected coneflower also had green, sickly petals — another sign. 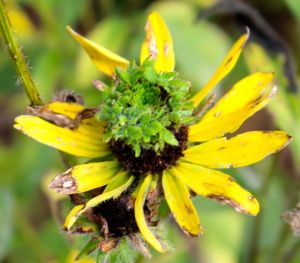 The leaves of the coneflower looked green and healthy, and even the flowers didn’t look too bad, just strange. However, the infected Black-eyed Susan was clearly sick. Like the coneflower, it had the strange growths in the centers of its flowers, but the leaves were also yellowing and dying. 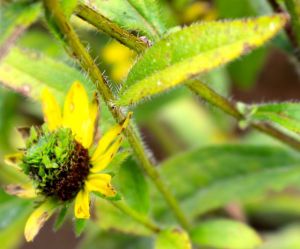 I photographed the infected flowers and then disposed of them. The link above also notes that the infection can be spread between plants via dead-heading, if you don’t wipe off your clippers with alcohol between plants. The disease was probably isolated to only these two plants in my garden because I don’t dead-head coneflowers or rudbeckias. I prefer to let them set seed, so the goldfinches and other seed eaters can enjoy them. 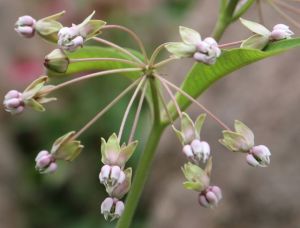 The Poke Milkweed (Asclepias exaltata) that I planted last fall is blooming. Compared to the showier butterfly weed (Asclepias tuberosa) and swamp milkweed (Asclepias incarnata), it is a demure plant. But I find I like the pendulous pale pink flowers. Alas, so far its flowers have attracted more ants than bees or butterflies. Still, it’s there if the Monarchs manage to find my garden. 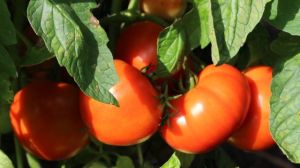 I’m picking tomatoes and beans daily again, now that the temperatures backed down to the low 90s and we’ve had some rain. And the basil is having an excellent year. I cut whole stems of it for a vase in the kitchen, so that Wonder Spouse has leaves handy as inspiration moves him to add them to his culinary masterpieces.

The rains have also inspired the weeds to new heights and numbers. Truly, a gardener’s work is never done. I do the best I can, as I observe and enjoy the comings and goings of flora and fauna through their seasonal dance. 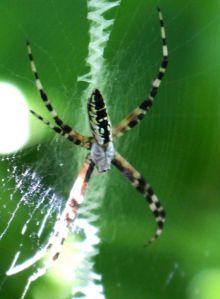 This entry was posted on July 15, 2015, 4:32 pm and is filed under piedmont gardening, Vegetable Gardening. You can follow any responses to this entry through RSS 2.0. You can skip to the end and leave a response. Pinging is currently not allowed.