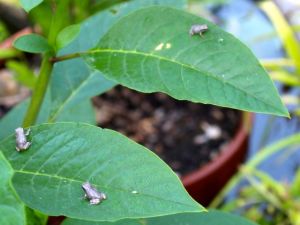 This morning’s crew newly emerged from the front water feature.

It’s too hot to garden, too hot to write, too hot to think — basically too hot for anything but drinking iced drinks and moaning softly. Still, before the sun tops the trees on my eastern border, I drag myself out for a few quick photos. I figure if the daylilies and the animals are still making an effort, I must also.  Thus, this homage to the newbies.

This one does like a bit of extra water, which is why I planted it at the base of the water feature. 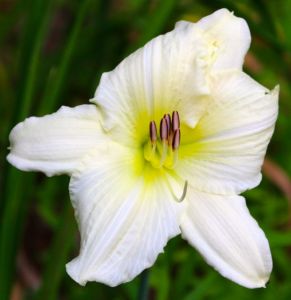 Joan Senior is a ruffled white beauty that stands up to the heat remarkably well.

This very tall daylily is blooming profusely without the benefit of any extra water from me. Amazing. 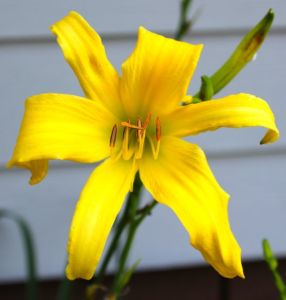 This elegant tall spider daylily is having a great year because I actually managed to weed around it. Small victories. Baby steps. 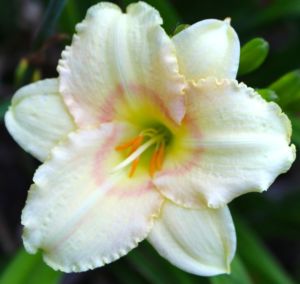 When I stop paying attention, most of the daylilies set seed. When I really stop paying attention (say, during prolonged heat waves), those seeds actually mature, fall to the ground, and germinate. Given the location of this volunteer cross, we are guessing its parents were Red Toy — 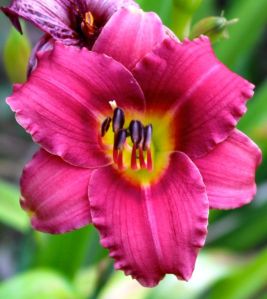 A number of the other daylilies I’ve shown you previously are still pushing out blooms, but the flowers aren’t even lasting a full day, due to heat/drought stress.

The weather seers are promising dramatic relief by the weekend. Here’s hoping they get it right this time.

The Pokeweed intruding in my front garden is the favorite perch of the newly emerged froglets. Sometimes I guess it’s a good thing that my weeding tasks are postponed.

This entry was posted on June 23, 2015, 6:07 pm and is filed under Favorite Plants, Native Wildlife, piedmont gardening. You can follow any responses to this entry through RSS 2.0. You can skip to the end and leave a response. Pinging is currently not allowed.