Wonder Spouse bought me a new camera last Christmas. I liked my old one a lot, because it had a built-in zoom feature. I’m not a photographer — more of a point-and-click documenter of things I think are interesting and/or pretty. But the old camera is starting to resist zooming, sometimes sticking, and repairing it would have cost more than half the price of a new one. So I have a new camera.

But I have resisted learning how to use it, preferring to nurse my old camera along. Finally Wonder Spouse couldn’t stand it anymore; he sat me down and showed me what the new one would do. What finally turned me into a new-camera user? The close-ups. 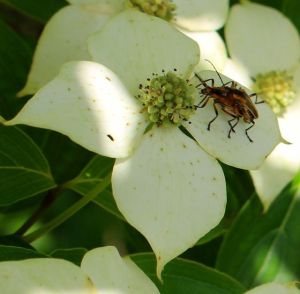 My old camera would never have been able to get these shots. And they’re still not as good as what Wonder Spouse gets out of my camera when he uses it. But even so, I’m tickled pink to be able to photograph little critters more easily. 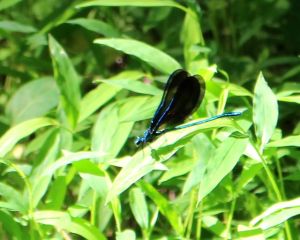 Some insect subjects were more cooperative than others. I chased the above damselfly all over the floodplain this morning. It never sat in one place for more than five seconds. The photo is not as sharp as I’d like, but the insect is at least readily identifiable.

The biggest insect surprise during my walkabout were the honeybees. I’ve known for years that they use evaporative cooling in their hive. They carry water to the hive and then fan it about with their wings to maintain a more even temperature. During droughts, I’ve often seen them visit my bird baths. They sidle up to the edge of the water, drink as much as they can, then fly off. But this year, for reasons known only to the honeybees, they have decided to drink from the little water feature in my front garden — the one full of tadpoles and murky green water. 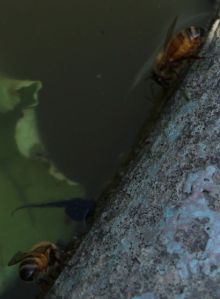 See the tadpole in the water below the bees?

The water is deep enough for them to drown if they slip, and I’ve seen a few honeybee bodies floating among the tadpoles. Why are they drinking here when a shallow bird bath — with water I change daily — would be so much easier and less slimy?

A honeybee dips its head into the murky water of my tadpole pond.

This entry was posted on May 27, 2015, 6:43 am and is filed under Native Wildlife, piedmont gardening. You can follow any responses to this entry through RSS 2.0. You can skip to the end and leave a response. Pinging is currently not allowed.