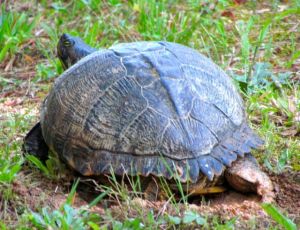 As I recently explained here, our backyards and gardens will have increasing difficulties remaining healthy unless we preserve surrounding native woodlands and fields too. The wildlife we need to pollinate our vegetables, gobble up pesky insects, and beautify our homes with color, movement, and song need those surrounding native ecosystems to find food, shelter, and nesting sites. Thus, I am enthusiastically supportive of regional nonprofit organizations dedicated to preserving and protecting the special places near our homes. With the “season of giving” nearly upon us, I thought I’d mention a few of the organizations that could use your help to save some of the remaining special places in the southeastern US piedmont region.

Many of these places are choice examples of native ecosystems, still mostly undiminished by intrusive non-native invasive species and destructive land-clearing. Some preserved lands are farms, many held by generations of the same family, lovingly cared for and appreciated. Many folks don’t know this, but the really prime so-called arable lands — the ones ideal for farming — are rapidly vanishing in urbanizing areas of the southeastern piedmont. The reason? Prime arable lands tend to be located in places where people like to live — beside rivers and creeks, where centuries of flood deposits have left behind deep, rich soils. The Native Americans knew this and exploited these areas for their farming activities. European colonists often took over these areas to grow their own crops. 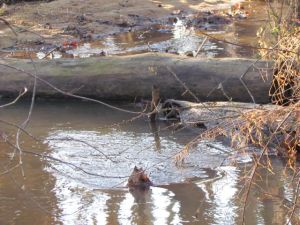 Actively flowing water in our creek

Many historic sites — mills, forts, trading centers, and battlegrounds — are found near our rivers and streams. Water was a key transportation route and critical to survival. Many not-yet-urbanized areas near our rivers and streams are treasure troves of history and healthy ecosystems, and regional land trusts throughout the southeastern US are valiantly trying to preserve what they can.

One group in the piedmont region just west of where I live is doing a particularly fine job of preserving special places. I only recently learned about the existence of the LandTrust for Central NC when I attended the annual meeting of the NC Friends of Plant Conservation.

The LandTrust for Central NC is nationally accredited by the Land Trust Alliance — no small distinction, I assure you. They “work with private and public landowners to protect the special natural areas, family farms, and rural landscapes of Anson, Cabarrus, Davidson, Davie, Iredell, Montgomery, Randolph, Richmond, Rowan, and Stanly Counties. ”

I was so impressed after listening to the presentations of the Executive and Associate Directors of this organization at the meeting of the NC Friends of Plant Conservation that I immediately visited the group’s Web site when I got home. I was not disappointed. In fact, I think it’s one of the most well-designed and useful Web sites for a conservation organization that I’ve seen. I was so impressed, I joined, and even more impressed when, a few weeks later, I received a 16-page color publication entitled “Field Notes, October 2014.” This publication listed the many accomplishments of the group this year, including the numerous hikes and other functions it sponsored for public participation.

To all you North Carolina piedmont gardeners who live in or near the counties covered by this group, I encourage you to visit their Web site and get involved in what they’re doing. Their work protects your gardens as well as the history and ecology of our wonderful region.

The publication featured an exciting project for which they are actively seeking funds. They’ve already received a substantial grant to provide more than half of what they need, but they still need more than $100,000 to purchase and secure the site, and this site has it all. Located just above the Yadkin River in Davidson County, the nationally significant 13-acre site’s biggest claim to fame is as the location of one of the last major Confederate victories in the Civil War. Over half of the original earthworks of the Confederate Fort York are still intact! Just below Fort York is the historic Trading Ford Area, a low-water crossing point used by Native Americans as a trading site. Nearby is the location where the Spanish explorer, Juan Pardo, documented meeting a local Indian tribe in 1567 — twenty years before the Lost Colony was settled by the English. Fort York also overlooks the spot where Nathanial Greene and his troops narrowly escaped General Cornwallis’ army during the American Revolution.

Previous owners of the land appreciated the amazing historical significance of this area and have left it undisturbed, which means the native ecosystems on the land are also healthy and worthy of protection. Frankly, I’m amazed that local, state, and federal governments haven’t stepped in to protect this land. Thank goodness the LandTrust of Central North Carolina is on the job!

Please visit their Web site, read of their many accomplishments, and the many opportunities they offer the public to enjoy these preserved lands. Consider making a donation to this group this season. You’ll help preserve some very special piedmont places, and albeit indirectly, your gardens will benefit too. 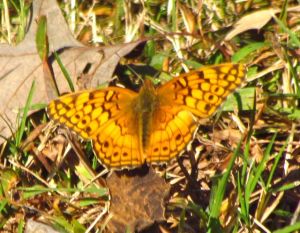 Your garden pollinators will thank you!

This entry was posted on November 24, 2014, 11:08 am and is filed under Conservation Corner, piedmont gardening. You can follow any responses to this entry through RSS 2.0. You can skip to the end and leave a response. Pinging is currently not allowed.