Aerial acrobats in the garden 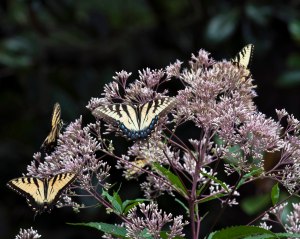 Record amounts of rainfall this growing season continue to create ripple effects throughout my landscape and gardens. For the first time I can remember, I harvested two zucchinis today. Normally by this point in the summer, heat, drought, and insect pests have exterminated my squash crop. Not this year. Zucchini spice bread, anyone?

Likewise, the Fortex pole beans seem to be ramping up for another surge in bean production. The vines have already climbed their six-foot trellis, grown down the other side, and now I’m trying to persuade them to climb back up again.

Tomatoes? Oh yes, we’ve got tomatoes. The plants are fighting fungal diseases, but the fruits are coming in bigtime. Ornamental flowers, which have often surrendered to the heat by now, continue to bloom with abandon. I’ve got sunflowers, zinnias, nasturtiums, and cosmos among the annuals. Perennials like black-eyed Susans, coneflowers, salvias, verbenas, daylilies, and now cardinal flowers have never been happier. 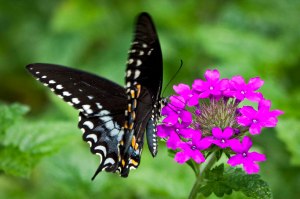 The rain has also produced a bumper crop of biting flies, gnats, and mosquitoes, among the aerial pests. But that’s not all bad, because the record abundance of flying insects has also brought record numbers of predators to prey on them. Insect eaters like Eastern Bluebirds, Blue-gray Gnatcatchers, Carolina Wrens, and Eastern Phoebes patrol the skies from dawn to dusk. Numerous bats take care of night patrol. And during the heat of the day, when the birds relax in the shade, the sky dragons take over. 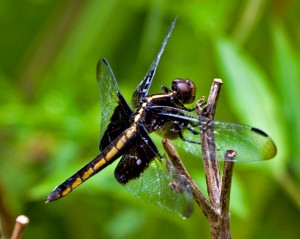 A Sky Dragon pauses briefly before resuming its hunt for flying food.

I have not yet spent the time needed to learn the names of our local dragonflies, but I can tell you our landscape is blessed by quite a number of species, some small, some as large as the hummingbirds with whom they share the sky. Wonder Spouse was so struck by the diversity of dragonflies in our yard last weekend that he spent some time capturing them with his camera. In fact, all the photos in this post were taken by Wonder Spouse.

The butterflies thrust themselves deeply into the throats of the flowers of our Autumn Daffodil daylilies. See its tongue curling above its head?

Dragonflies are efficient hunters, and yes, they do grab and devour an occasional butterfly on the wing. But they glitter like jewels; their wings appear to be made from delicate lace, yet are strong enough for aerial maneuvers any stunt pilot must envy.

An emerald Sky Dragon pauses on a boulder.

As much as I love the butterflies, this year we can lose a few to the dragonflies. My Chinese Abelia, a massive shrub about 10 feet tall and equally wide, has been blooming since June — and continues to do so. All day long, it is visited simultaneously by at least a hundred butterflies. I’ve never seen so many!

When they fill up on the Chinese Abelia, the Eastern Tiger Swallowtails stop by the lantana growing along the front walk.

Between the drifting flight of butterflies and the zooming quick starts and stops of the dragonflies, I get bumped into on a regular basis as I walk around my yard. 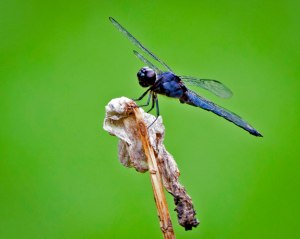 This dragonfly appears to be made of lapis lazuli, or perhaps sapphire.

Patterns on the wings of the dragonflies are likely diagnostic. I really must learn the names of these hunters. 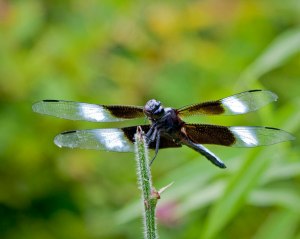 The white wing bars on this one make it more noticeable in flight.

This one appears to be designed to blend in with the trees.

Butterflies, of course, are silent creatures. If I stand right next to the blooming abelia, I can sometimes hear a gentle fluttering of wings by the Spicebush Swallowtails, which never seem to remain motionless for more than a few seconds. Dragonflies make a bit of a buzzing noise as they zip erratically through the air, snagging snacks on the wing.

But for aerial maneuvers with sound effects, you can’t beat the Ruby-throated Hummingbirds. This season has brought a bumper crop of them to the front feeder. The bejeweled beauties visit it from dawn to full dark. It seems to be a pit stop for them when they tire of dashing from coral honeysuckle to cardinal flower to salvia to abelia, all the while chittering as they argue over the rights to a particularly tasty nectar source.

After an early morning harvest session in the vegetable garden, I spend probably too much time sitting in the shade and watching the aerial show. I’m not the only one. I often spy a Green Anole perched on a shrub or vine within grabbing distance of unwary butterflies. And a large Green Frog usually meditates in one of the pots of sedges and pitcher plants sitting in our front water feature. The cicadas thrum, the hummingbirds swoop and squeal; in the distance, a Yellow-billed Cuckoo calls from the treetops, predicting more rain.

Pesky bugs and all, it’s the best summer we’ve had in years. I reckon I’m not going to feel to guilty for enjoying it as much as possible.

A Sky Jewel grabs a quick drink from the feeder that I keep supplied with fresh fuel.

This entry was posted on July 31, 2013, 1:22 pm and is filed under Native Wildlife, piedmont gardening, Vegetable Gardening. You can follow any responses to this entry through RSS 2.0. You can skip to the end and leave a response. Pinging is currently not allowed.