Autumn is only a few weeks along, but the occupants of my yard and gardens are progressing toward readying themselves for winter. For example, the lovely mushrooms in the above photo are sprouting up beside my driveway in growing numbers. As they grow from button stage (far left) to middle age (far right) and full ripeness (center), zillions of mushroom spores are readying themselves for release from the gills under the caps. Many colors and shapes of fungi are currently taking advantage of the cooler, damp weather here.

The Black Walnut had a very productive year. Hard hats to defend against falling nuts are no longer required when walking beneath it, but now one must watch every step to avoid slipping on the yellow-green orbs hiding in the grass.

The squirrels wait for the outer green husks to soften before they start working on these nuts.

The Red Buckeye had another bumper crop year. These nuts are poisonous, but the squirrels can’t resist carrying them all over the yard and burying them.

The outer husks crack open and drop the buckeyes to the ground. Some folks think these fruits are good luck.

The Beautyberry shrub and the big Hearts-a-burstin’ flourishing on the upper floodplain both had very productive years. 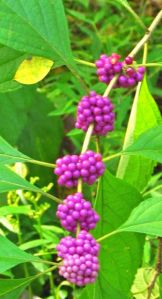 Even in deep shade, these colorful berries glow like Christmas ornaments. 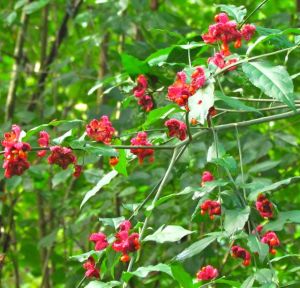 The Asian kousa dogwoods were also very fruitful. The evergreen one tended to produce fewer, fatter red globes like this:

The deciduous kousa dogwood must have been very thoroughly pollinated this year — yet another autumn beauty that seems to be vying for Christmas tree status.

This Cornus kousa dwells beside our back deck. Its leaves are just beginning to turn lovely shades of orange.

This recent visitor below was neither a fruit nor a nut, but it was so gorgeous that Wonder Spouse felt obliged to take its picture, and I’m glad he did. This was a new insect for us, a showy member of the dung beetle clan. Truly, if someone made a jeweled pin based on this creature, I would proudly wear it. 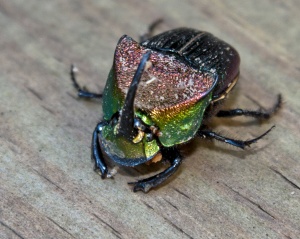 Meet a male Rainbow Scarab. The “horn” denotes its gender.

And here’s more of a side view: 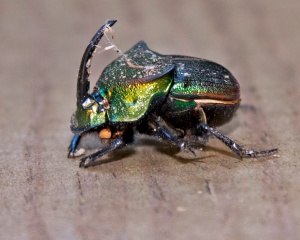 Note the bit of spider web tangled in its horn.

This fellow was walking around our back deck. We suspect it stunned itself on one of our windows, staggering about just long enough for Wonder Spouse to document his visit. He flew off ten minutes later.

I’ll close today with a few more nuts — the animal kind. We seem to have a bumper crop of Green Anoles this year, perhaps the result of behavior like what I documented here. The front of our house faces west. Warmth from late afternoon sun combined with a flourishing front garden seem to have produced ideal anole habitat. One afternoon last week, I caught four basking on various parts of the front of my house — some large, some quite small.

The first one I saw was a large brown lizard that had trapped itself between my front door and the outer storm door. When I opened the inner door to go out, it frantically beat itself against the storm door until I could get it open. Here it is glowering at me as it recovers from its self-inflicted trauma.

After taking that one’s picture, I noticed a small one basking on the front wall.

It was about six inches long, but quite skinny.

Then I spotted this green one hanging out around my bedroom window. It actually climbed the glass and seemed to be trying to peer inside. 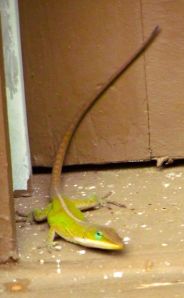 I tried to persuade it that it will be far happier outdoors.

Finally that day, I spotted another green one below the bedroom window on the wall behind an overgrown rosemary shrub. It was more shy than the other three. 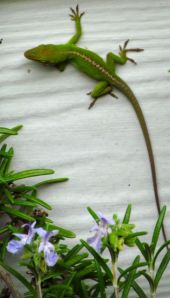 This rosemary started blooming last winter and only stopped during the July heat wave.

These anoles were all out on a very warm day. We had a string of 80+-degree days ahead of a cold front. I think perhaps they were all trying to soak up as much heat as they could before retiring to their winter slumber spots. I’m wondering if perhaps their abundance is making it difficult for them to all find cozy winter quarters, because of what I observed yesterday.

Yesterday was the last warm day before the arrival of a cold front that has dropped our temperatures about thirty degrees. And it was yesterday that Wonder Spouse noticed that a brown anole was actually on the inside of the window beside our front door. It must have slipped inside when one of us opened the door. It may well have been the same one that I caught between the two doors the day before.

Fortunately, it was quite cooperative about its relocation to the outdoors. We used a butterfly net, intending to scoop it up gently. But it chose to perch quietly on the rim long enough for us to escort it back outside to the garden, none the worse for its adventure.

Late yesterday as the sun was setting, one of the anoles did something even more unexpected — nuttier, if you will. I always leave my hummingbird feeder filled until the second week of October, or until I don’t see any hummers for a week or so. Yesterday when I checked the feeder before going inside, I saw this: 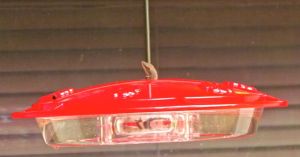 Yes, that’s an anole head peeking out from the middle. It’s curled up in the center cup where one can put water to deter ants.

I imagine the surrounding sugar water was quite warm from the late afternoon sun, and this little one thought it had found an ideal hangout. Of course, the water doesn’t stay warm at night, and any hummers trying to drop by wouldn’t know what to think, so we gently lifted down the feeder and encouraged the anole to return to the garden.

It really didn’t want to leave its cozy spot, but I think it was probably for the best.

I checked the front wall today without expecting to see any anoles. One brown one stuck its head out from behind a gutter for just a moment, then disappeared. Given our drizzly, chilly day, I was surprised to see an anole at all. I hope they are all settling down for a long winter’s sleep, along with all the other plants and animals that share our five acres of North Carolina Piedmont.

This entry was posted on October 7, 2012, 5:17 pm and is filed under Favorite Plants, Native Wildlife, piedmont gardening. You can follow any responses to this entry through RSS 2.0. You can skip to the end and leave a response. Pinging is currently not allowed.