A Piedmonter Revisits the NC Mountains 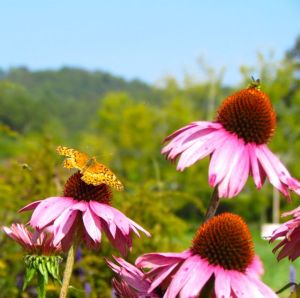 It doesn’t look particularly imposing in this picture, but that’s a mountain in the background. I discovered I had no great photos of the majestic Great Smoky Mountains when Wonder Spouse and I returned from our recent vacation in far western North Carolina. All my good shots are of flowers and/or pollinators. Go figure.

Wonder Spouse and I made the trek to higher elevations to celebrate the passage of his recent milestone birthday. For the sake of marital harmony, I shall refrain from identifying the milestone to which I refer. Happy Birthday again, sir!

We enjoyed ourselves immensely, and we met many wonderful folks as we traveled about. However, I found myself often dismayed by what has happened to much of the landscape. From a distance, the mountains are still as beautiful as I remember from childhood visits. On the ground, the story was much different. Almost every single road we traveled was edged by rampant kudzu (Pueraria montana var. lobata) overgrowth. The vines scaled towering rock cuts through mountains, smothering trees, rocks, and shrubs as far back from the road as I could see.

Even in the Nantahala National Forest, kudzu was often the only green plant I could see as we drove along. This was especially horrifying to me as we drove through the Nantahala River Gorge. On the day we were there, the Nantahala River was crowded with kayakers and rafters enjoying the journey downstream through rocky rapids. Perhaps they were too busy dodging boulders to notice that either side of the river was overrun by kudzu — an invasive exotic species originally introduced to the US in the 1930s to control erosion.

The only light moment for me during that drive was a road sign that read “Watch for slow raft buses next ten miles.” Until I saw the old school buses with platforms built on their roofs that held stacks of colorful inflatable rafts, I was mystified.

Invasive exotic plants were mercifully much less evident during our pilgrimage to the Joyce Kilmer Memorial Forest. This preserve protects a forest with 400-year-old trees. Until you’ve stood beneath Tulip Poplars with circumferences more than 20 feet, you cannot begin to imagine what our southeastern forests must have once been like.

Even in early autumn, evidence of mountain wildflowers was everywhere. Tall white plumes of Black Cohosh were still abundant. Stream slopes were adorned with leaves of all the spring wildflowers. They must be quite a sight in April. Deciduous magnolias dotted the hills, along with Cinnamon-bark Clethra. It was quite wonderful to see these native trees where they belong; I hope they eventually look as lovely in my Piedmont landscape where I’ve planted them.

Yellow Jewelweed (Impatiens pallida) was blooming prolifically. I’m not sure I convinced a visitor we met on the trail that this gorgeous yellow wildflower was not an orchid. I tried to explain to him that the orchids native to this habitat don’t bloom this time of year, but I’m not sure he was persuaded.

This wildflower was also abundant at the school where we spent most of our time in the mountains. While Wonder Spouse honed his photography skills, I wandered the large property, where I constantly encountered a depressing number of invasive exotic plant species. This vine was growing on a trail we walked daily to reach the dining hall. 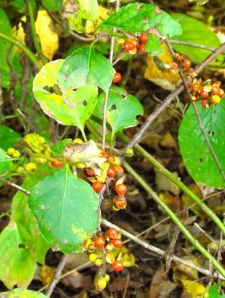 Oriental Bittersweet (Celastrus orbiculatus) was imported as an ornamental for home landscapes. As happens so often, it has escaped into our woodlands. This particular invasive vine is bad in spots in the Piedmont, but not on my property. I hadn’t realized how common an issue it has become in our mountains until I saw it growing here. 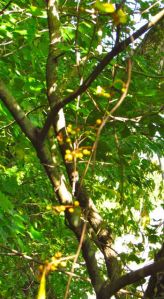 Not a great shot, but you can see how high it climbs into the treetops.

During my walks along the grounds of the school we were visiting, I saw many other invasive exotic species throughout the property, including mulitflora rose, privet, Japanese bamboo grass, Princess Tree, Tree of Heaven, and English ivy. All had clearly escaped from former home landscapes. Many of these plants produce fruits beloved by birds, which is how these invaders have spread so insidiously. Others make seeds that are lightweight and travel far via air and water.

The best Web site I know of to learn more about invasive exotic plant species in the mountains of North Carolina is part of the site for the North Carolina Exotic Pest Plants Council. To learn about the mountain invaders and how to control them, go here.

The size and seeming solidity of mountains make it easy to imagine that theirs is an unchanging landscape, where time stands still, or at least moves too slowly for mere humans to notice. My recent visit to the Great Smoky Mountains has dispelled that illusion. The hand of humankind is all too evident. I can’t help wondering how much longer the exquisite ecosystems native to this region can hold out.

This entry was posted on September 25, 2012, 10:38 am and is filed under Invasive Exotic Species. You can follow any responses to this entry through RSS 2.0. You can skip to the end and leave a response. Pinging is currently not allowed.