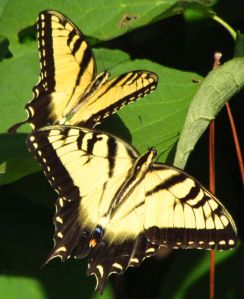 Abundance abounds on my five acres of North Carolina Piedmont. As summer winds down, plants are multiplying with enthusiasm, and native animals are taking full advantage of the bounty.  My area saw a week of what the weather seers call “unsettled weather,” which means thick humidity, uncomfortable (but not intolerable) heat, and random thunderstorms. As usually happens of late, my patch of Piedmont was ignored by most of the rain clouds, but we got enough to push plants and animals into a bit of a late summer frenzy.

Butterfly multiplicities are evident on every blooming flower in my yard. Species diversity seems to be multiplying too. I’ll show you in another post. I caught the two above as they were basking in the first sunshine we’ve seen in several days. I think they missed the light as much as I did.

Most of the plants are in the final stages of seed production, filling up seed heads and capsules, preparing to release their progeny into autumn air when it arrives in a few weeks.  Here’s a pair of Tulip Poplar “cones.” 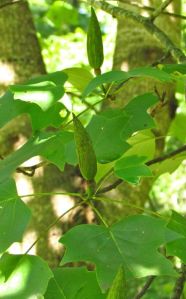 All the Tulip Poplars reproduced well this year. I predict I’ll be sweeping their seeds off walks all fall and winter.

Another member of the Magnolia family — Umbrella Magnolia (Magnolia tripetala) — was kind enough to produce one of its spectacular seed heads within range of my camera: 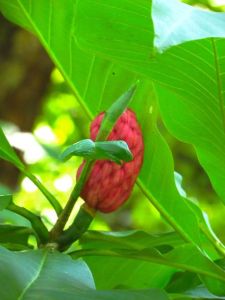 Animal multiplicities include the deafening, constant, ebb and flow of cicada thrumming. They are maximizing their time in the humid air that makes me stick to myself after two minutes outside. Also present in astonishing numbers are the American Robins. I don’t think I’ve ever seen so many this time of year. These are not the flocks of spring and autumn migrators that I’m accustomed to seeing. These are local birds — newly adult ones, judging by their very motley breast feathers.

The American Robins are here because of the bumper crop of Pokeweed (Phytolacca americana) dominating every untamed corner (we have a lot of those) of the property. Easily eight feet tall with stems thicker than my wrist, these magenta and green very poisonous natives are currently weighed down by the biggest crop of berries I’ve ever seen them produce. The American Robins have claimed this crop for themselves. From dawn to dusk, I hear their muttering and exclamations as they devour every purple berry they discover. 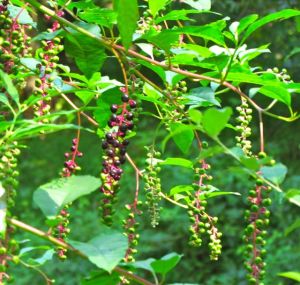 Poisonous to humans, Pokeweed is a favorite food of American Robins and many other native animals.

I admit I don’t argue much with this plant. Unless it pops up in a spot that just won’t work, I usually let it have its way. However, if I had children or dogs with a habit of eating fruits in the wild, I would eradicate this plant from my yard. It is extremely poisonous to humans, from its roots to its leaves and berries. Yes, young leaves, if boiled for long periods, are consumed by some as “poke salad,” but I think the dangers aren’t worth the risk. Proceed with caution if you welcome this species into your Piedmont yard.

Photogenic and important to wildlife

Also multiplying in my yard: spiderwebs! I can’t walk anywhere without walking into one.

The builder was probably hiding in the leaves of the shrub that holds its web.

The arachnids even build across our often-used front walk. Every morning this time of year, it’s best to wave a stick in front of you to intersect the webs before your face does.

Multiplicities of fungi are also popping up all over the yard. Today, I encountered this large collection of delicate beauties:

They are quite exquisite up close, as you can see here:

The delicate folds in the caps remind me of outspread paper fans.

I am not an expert on fungi, so I assume they are all poisonous. I leave them to adorn the landscape and only consume mushrooms I buy at grocery stores.

As summer begins its reluctant transformation to fall, Nature’s multiplicities ensure that next year’s growing season will be productive — barring the usual weather catastrophe caveats, of course.

I revel in the beauty and diversity of this abundance, but I’m also hoping for a real winter this year — one with prolonged bouts of weather cold enough to freeze the ground and kill problem insects, diseases — and maybe even a few Pokeweed plants. One can only handle so much magenta and purple in the landscape after all.

This entry was posted on August 12, 2012, 4:58 pm and is filed under Native Wildlife, piedmont gardening. You can follow any responses to this entry through RSS 2.0. You can skip to the end and leave a response. Pinging is currently not allowed.