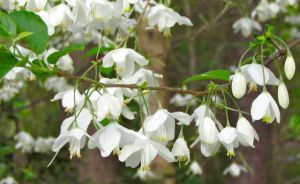 Ah, what a wacky season it has been — and continues to be. A prime example is my exquisite Two-Winged Silverbell (Halesia diptera), which bloomed last year on April 15. This year, peak bloom was this past Monday, and now the blooms are mostly gone. Uncharacteristic heat, heavy downpours, and strong winds shortened this tree’s blooming season to the blink of an eye.

Here’s what the entire tree looked like from a distance:

See the whiteness on the ground beneath it? Those are flower petals, which were already rapidly falling, even though the flowers had barely opened. Here’s a closer look at the petals on the ground:

And because this wonderful tree’s season was so painfully short this year, I offer you one more photo. This one is what the top of the tree looked like as I stood beneath it:

This beauty is about 30 feet tall and fifteen feet wide.

At least I had the chance to photographically document this lovely native.

My huge Black Cherry tree bloomed two weeks earlier than last year. By the time I thought to try to photograph the flowers on April 2, they were already dropping, leaving tiny cherries in their place. I never tire of watching the birds — especially the Pileated Woodpeckers — devour this fruit when it ripens. Here’s what I saw on April 2 this year:

The Red Buckeye, on the other hand, was unimpressed by March’s early warmth. Last year, I wrote of its first blooms on March 30. This year, most blooms were open on April 2, and the tree continues to reign redly over my floodplain. Here’s a shot from this past Monday:

Red Buckeye flowers are supposed to call in the Ruby-Throated Hummingbirds, but I haven’t seen a single hummer yet at my house.

I’ll close with a few swamp shots. Those natives are well ahead of last year. The Cinnamon Ferns were displaying fully developed fruiting fonds last Monday when I took this shot:

The Jack-in-the-Pulpits are also well ahead of last year. Here’s a shot of a green one with an Atamasco Lily bloom — another species blooming earlier:

And here are some equally precocious purple Jacks blooming lustily despite being surrounded by poison ivy and other swamp plants:

I’ll leave you with proof that I’m not the only one prowling my muddy floodplain these days:

Deer at the top, and maybe a healthy raccoon below?

I’ve got even more photos of plants whose flowers have already come and gone. Stay tuned for future installments. I guess the moral of the story is to wander through your yards and gardens as often as you can this time of year. If you linger indoors, the wonders of spring will most surely pass you by.

This entry was posted on April 6, 2012, 10:56 am and is filed under Favorite Plants, Native Wildlife, piedmont gardening. You can follow any responses to this entry through RSS 2.0. You can leave a response, or trackback from your own site.