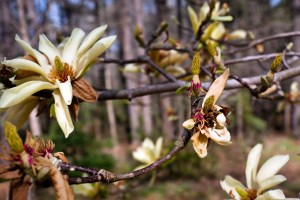 The vernal equinox occurred during the wee hours this morning. Astronomically speaking, that makes spring officially here. As is true for much of the United States this year, the news is entirely anticlimactic.

My early spring bloomers have not only been blooming for weeks, many of them finished almost as soon as they started, thanks to the record heat and drought that continues to plague my corner of the Piedmont in North Carolina.

Case in point: my lovely Magnolia ‘Butterflies.’ Two days after it began blooming, petal drop started. The above photo was taken three days ago. Now almost all the petals have dropped.

Magnolia ‘Elizabeth’ didn’t wait her usual week after Butterflies to commence her floral display. Instead, she peaked the same day the photo above of Butterflies was taken. Here’s a shot of the whole tree. Elizabeth is a knock-out — visually and aromatically — when she is at her peak like this:

Wonder Spouse took all these photos, by the way. You may well want to click on them to enlarge them, so you can fully appreciate their quality. Here’s a close-up of Elizabeth’s flowers taken the same day as the above photo:

The Bloodroots growing on my north-east-facing slope above the creek began blooming about the same time that Magnolia ‘Butterflies’ got started.  Here’s one that’s been open for a couple of days:

And here’s what most of them looked like that day:

Bloodroot petals lie discarded on the ground as the seed capsule expands.

Not to be outdone by these precocious bloomers, the first flowers of my native Pinxterbloom Azalea were nearly open the same day that the above photos were taken (March 17). That’s three weeks ahead of last year.

For the first time that I can remember, my oak trees are racing the Loblolly Pines to see which will release their pollen first. I think it may well be a tie. I cannot remember that happening before. Not ever in all the 5+ decades I’ve lived in North Carolina.

So, Vernal Equinox — welcome, I guess. The party started well before your arrival this year. And it’s already well on its way to its conclusion. I just hope that by the time the Summer Solstice arrives, my landscape doesn’t look too much like the Sahara Desert. 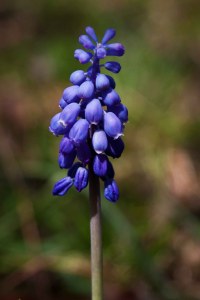 One of countless Grape Hyacinths that randomly pop up in parts of our “lawn” this time of year — whatever season you choose to call it.

This entry was posted on March 20, 2012, 9:06 am and is filed under Favorite Plants, piedmont gardening. You can follow any responses to this entry through RSS 2.0. You can leave a response, or trackback from your own site.