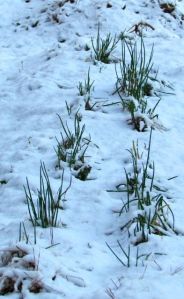 Last Sunday night, a cold rain morphed into brief snow, just as the weather seers predicted. It began melting as soon as it stopped, so Wonder Spouse ran out with a ruler to document it: right at an inch — for about 15 minutes.

The next morning after the sun rose, I grabbed a few photos of the yard before the white stuff from our twenty-four-hour bout of winter vanished. In the above photo, those are chives that I grew from seed last year. They had already begun putting out vigorous new growth, and they are laughing at this bit of snow — probably enjoying the added moisture.

I told you about the onions I planted here. This is what they looked like yesterday morning: 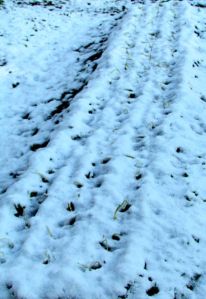 You can barely see them poking through the snow, but they’re there, and they are just fine. Ditto for the skinny ones I planted on either side of the sugar snap pea trellis: 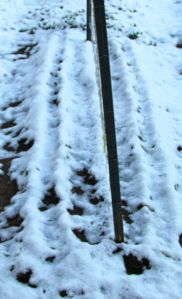 I am hoping the peas will emerge later this week during the bout of predicted 70-degree weather.

The rain that preceded the snow coated many of the trees and shrubs, and that water briefly froze as the snow fell, creating thin ice encasements for some branches and buds. But, again, it didn’t last long enough to hurt anything. Instead, the ice added to their aesthetic appeal, as you can see here:

Alas, the weather forecasters were correct when they backed off on their precipitation quantity predictions. All told, our rain gauge reported a mere 0.75 of an inch. Not enough to begin to quench the rising thirst of wakening vegetation. If the rains don’t come soon, it will be a very depressing growing season indeed.

This entry was posted on February 21, 2012, 10:07 am and is filed under piedmont gardening, Vegetable Gardening. You can follow any responses to this entry through RSS 2.0. You can leave a response, or trackback from your own site.