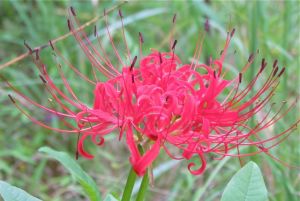 To most southerners, these flowers are known as Hurricane Lilies. Hurricane Lilies (Lycoris radiata) have been part of southern gardens since the late 1800s, when they were imported from their native lands in Asia. Some folks call them Red Spider Lilies, and I’ve heard them called Magic Lilies or Surprise Lilies, but I prefer the name that associates them with our hurricane season (although the notion of calling them Birthday Lilies is growing on me).

The bloom stalks appear without leaves, which explains some of their names; it’s easy to forget they’re there. One early fall day, sturdy 18-24-inch bloom stalks appear, topped by fat reddish buds that open to reveal clusters of deep crimson tubular flowers with long anthers protruding out so far that some folks think the flowers resemble big red spiders.

If hurricane rains don’t beat them down, the clusters last about two weeks, signaling migrating hummingbirds to come in for a quick pitstop as they head south. When the flowers finish, strap-like shiny green leaves appear, persisting through the winter.

All parts of the plant are poisonous, especially the bulbs, which explains why the voles leave them unmolested. In severe drought years, I’ve noticed that deer will eat the flowers. That hasn’t happened this year, and I suspect the reason is my lagging weeding schedule. My enthusiastically blooming Birthday Lilies are currently showing off despite being surrounded by Sweet Gum seedlings, milkweeds, and the ever-expanding invasion of Bamboo Stilt Grass (Microstegium vimineum).

This year, about a dozen bloom stalks have appeared. Every time I think they’re done, the next rain event calls forth another surprise splash of red. I think of them as living fireworks, sent up in celebration of the quenching of our drought — and in celebration of Wonder Spouse’s birthday!

This entry was posted on September 5, 2011, 10:06 am and is filed under Favorite Plants, piedmont gardening. You can follow any responses to this entry through RSS 2.0. You can leave a response, or trackback from your own site.