It’s back — and it means business

Poison Ivy on the move

In my yard, the Poison Ivy (Toxicodendron radicans, formerly Rhus radicans) is having a great spring — from its perspective. From my perspective, I don’t seem to be able to walk anywhere without bumping into the stuff, and that’s not good.

It’s hard not to attribute malevolent intentions to this native vine. Its seedlings constantly surprise me by popping up in flower beds, or a vine will disguise itself in a shrub, its shiny trifoliate leaves emerging just far enough to brush my arms with its toxic oils as I walk past.

I know its not the Poison Ivy’s fault that I’m allergic to its secretions. It’s a native vine doing what it’s supposed to do — climbing trees to reach more sunlight, blooming and fruiting. It’s not the Poison Ivy’s fault that the birds think its berries are delicious. That’s just evolution — tasty berries get eaten, and seeds are dispersed far and wide — species survival is ensured.

I have likely made my Poison Ivy problem worse by increasing bird habitat in my yard. They “deposit” seeds of a number of undesirable (to me) plants that produce fruits they enjoy. Shall I blame the birds I invited myself?

This time of year is the worst. The fresh young leaves — often a lovely shade of red as they emerge — positively ooze their toxic oils now. If you want to use an herbicide to kill the Poison Ivy, now is the time to do it. The tender young leaves are most vulnerable to herbicides. As soon as they lose their shine, they’ve toughened up, and herbicides will be much less effective.

Poison Ivy fools some folks because of its variable looks. If you are allergic, do not touch the big hairy-looking vines you see climbing trees. Here’s some Poison Ivy crawling up a large Red Maple in my wetland. Note the big hairy vine on the right side of the trunk. 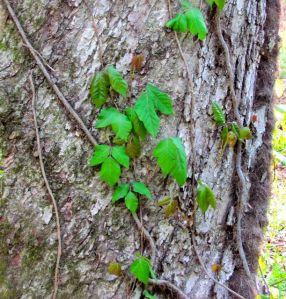 The aerial roots of Poison Ivy create the hairy effect, and you can get a rash from touching them as easily as from touching the leaves. Some folks think those vines won’t cause a rash in winter. They are wrong.

And whatever you do, please never, ever burn Poison Ivy vines, even if you are certain they are dead. The toxic oils linger for quite some time. When you burn vines, toxic oils are carried by the smoke far and wide. I’ve heard of people who have nearly died from Poison Ivy rashes inside their lungs; they inhaled the smoke of burning Poison Ivy.

So how do I live with the Poison Ivy plotting to take over my landscape? I pick my battles. Any ivy caught growing in my front formal beds is eradicated. Usually it’s small enough for me to pull up. I designate a special pair of gloves as my ivy gloves, and I am very careful putting them on and taking them off.

We also keep bottles by the sink of an ivy wash product. If you know Poison Ivy has touched your skin, you wash the affected area AS SOON AS POSSIBLE with this product, and it removes the sticky toxic oil from your skin. It works pretty well. There’s also an ivy-block lotion that, when applied to your skin, is supposed to prevent the oil from penetrating your skin and causing a rash. I haven’t tried it, but I know some folks swear by it.

I mostly leave alone the Poison Ivy growing up the trees on my floodplain. It’s not really in my way there, and the prospect of trying to saw through dozens of hairy vines thicker than my arm gives me the heebie-jeebies.

This entry was posted on April 19, 2011, 9:29 am and is filed under piedmont gardening. You can follow any responses to this entry through RSS 2.0. You can leave a response, or trackback from your own site.