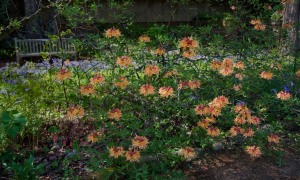 I think you’ll agree it’s a beauty. That’s Florida Flame Azalea, or Florida Azalea — Rhododendron austrinum, for those who like the Latin binomials. This native deciduous azalea not only looks good, it smells divine.

In my area of the North Carolina piedmont, it blooms in mid-April. The plant in this photograph grows at the North Carolina Botanical Garden in Chapel Hill, NC.  If you don’t know about this amazing public garden and you’re an avid gardener, put it on your Must-Visit list. Spend some time on their extensive Web site; it’s full of useful information. In addition to descriptions of their programs and facility, you can scan their southeastern United States invasive exotic plants list, and don’t miss their lists of suggested native plants for your home landscape.

I like this garden because its mission is all about teaching appreciation and conservation of our southeastern natives. And they walk their talk. Their natives-only demonstration gardens illustrate just how beautiful and versatile natives can be. Be sure to tour their new Education Building — LEEDS-certified platinum construction makes it a model for everyone in the region.

I fell in love with the native deciduous azaleas after admiring the mature specimens that bloom at the NC Botanical Garden from spring through summer. Colors range from white to shades of pink, yellow, orange, and deep reds. A mature specimen of Florida Azalea can be 8 to 10 feet tall and wide. Imagine its glowing presence at the edge of your natural area, nestled beneath taller canopy trees.

This particular azalea is one of the easiest to grow. Make sure it gets good drainage, adequate water while it’s establishing itself,  and mulch its roots to keep them cool. In a few years, your springs will be filled with the fragrance and sunshine of these amazing shrubs in bloom. They are hummingbird magnets, by the way, because they bloom before too many other food plants are open for business.

Because they are deciduous, these shrubs aren’t usually devoured by deer. There’s nothing green on the plant to attract them when they’re starving during food-scarce winters.

My R. austrinum isn’t as big as the ones at the NC Botanical Garden, but it is growing enthusiastically. The last two springs have been filled with fragrance and color when this beauty lights up the woodland on my north slope. It has plenty of other azaleas to keep it company there. I’ve added most of the native deciduous azaleas, siting them at the top, middle, or bottom of the hill, depending on their preferences. My Florida Flame Azalea flourishes toward the top end of the middle of the hill beneath a nearby mature persimmon tree and an enormous tulip poplar.

The picture above really doesn’t do this azalea justice. If you’re in the southeast piedmont next April or May, find a garden that features this native azalea and see (and smell) for yourself.  I predict it will win your plant-loving heart as easily as it won mine.

This entry was posted on January 21, 2011, 2:02 pm and is filed under Favorite Plants. You can follow any responses to this entry through RSS 2.0. You can leave a response, or trackback from your own site.